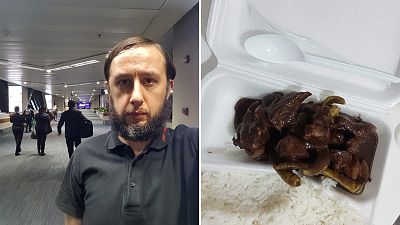 Roman Trofimov was forced to live in an airport with virtually no food options for 3 months   -   Copyright  Roman Trofimov
By Lorelei Mihala  •  Updated: 30/04/2021

With flights cancelled and borders closing due to the COVID-19 pandemic, many people have found themselves stranded in airports. While for some it’s only for a few days, others have ended up making the departure lounge their home for several months.

In March, 25 passengers were stuck in Charles de Gaulle airport in France for nearly three weeks, having travelled from the UK to Algeria. For a year now, Algeria has run a very strict border policy, suspending most air and sea connections.

The Algerian consul in Paris met the group and told them they needed to go back to their place of residence until the borders reopened. However, some said they couldn’t go back to the UK or had pressing reasons for travelling to Algeria, so they remained in the airport.

But the story doesn’t end there, a good number of people found themselves stranded abroad or sleeping on airport floors throughout the pandemic. We spoke to a few of them.

A European stranded in Manila

Roman Trofimov, a 37-year-old computer programmer from Estonia, calls himself the “European stranded in Manila International Airport for 110 days.”

To celebrate his birthday, Roman saved some money and decided to take a trip to Asia in March 2020. After one week in Thailand, he headed to the Philippines.

“It was just a coincidence that when I arrived in the Philippines, they started the lockdown, so I wasn’t able to go into the country,” he tells us.

As Roman was refused entry to the country, the only legal options for him were to fly back to his home country or to the initial departure point in Thailand. At the time he says Filipino officials and AirAsia told him he had to fly with the same airline. But his visa for Thailand had expired and soon after all flights were cancelled.

I came there as a free person, for a vacation, and I felt like a prisoner.

“They told me I should wait until the lockdown is over and the flights restored. The situation is like this, unusual and you just have to wait, we can’t offer you any solution,” he explains.

Roman says his passport was taken in the Philippines before he even went through immigration. He was travelling with a "grey passport", a common document in Estonia for those who have only received residency in the country, rather than automatic citizenship, when Estonia split from the USSR and became independent.

“I came there as a free person, for a vacation, and I felt like a prisoner,” says Trofimov.

So what happened next? He ended up spending the first week inside the arrivals terminal.

“The conditions they created there were terrible, just metal chairs and that’s all. It was like a transit area, not inside the country,” Roman says. The airport personnel did offer to bring some cardboard to sleep on, he adds, but that was hardly enough to be comfortable.

“They always played music there, like every five minutes the same song and this was for a whole week. I felt like I was going crazy, sleeping on metal benches, cold air conditioning, and loud music non-stop.”

With the whole airport closing, the first week was a real struggle. He used the public bathroom to wash himself, with no shower facilities. As for food - as all restaurants inside the airport were closed, he had to find his own solutions to stop himself from going hungry.

“There was a fast food restaurant outside the terminal, so I had to give money to the security guard, so he could buy food for me,” Roman says.

After he contacted the councillor of Estonia in the Philippines, Trofimov was finally moved to a hotel, still inside the airport, in the departure terminal. From then on, he started to receive food from the airline.

No breath of fresh air for more than three months

“It was the same every day. I woke up, and then I don’t know what to do, there was not much to do, it is just a terminal. I didn’t have any freedom, I only could move inside the terminal, I couldn’t go outside,” Roman continues.

His daily routine involved going downstairs for a change of scene. What was usually a busy area with lots of people waiting to board their flights was now a vast space, totally emptied by the pandemic.

“I could go there only to walk around, to sit on the benches, but there was nothing there because there were no flights, there were no people, it was empty. Every day was the same,” he says.

“I was just waiting for the quarantine to be over, because they were extending it every two weeks, but then they kept extending it more and more, and three months already passed.”

The conditions they created there were terrible, just metal chairs and that’s all. It was like a transit area, not inside the country.

After three months, the Philippines started to open up a bit and the 37-year-old watched as more people were slowly flying home. But he remained stuck in the airport, since there were no flights to Estonia.

“I just couldn't stand it anymore, I started to post on social media about my situation, so it drew attention, this is when everything happened, when they put it in the news and they arranged the flight within two days or something like that,” he says, indicating what a feeling of relief it was.

In the end, the councillor of Estonia arranged the flight for him.

At the time, Trofimov was not the only one stranded at Manila airport. However, many were able to fly back home within a few days, and only two other people, from the Ivory Coast and Cameroon, stayed at the airport for more than three months, along with Roman.

Since the beginning of the pandemic, many more have lived in airports around the world. A 41-year-old German was stuck in New Delhi airport for more than two months. A Russian student who wanted to come to Germany to study, despite the travel restrictions, found himself stranded at Frankfurt airport. A man who was too afraid to fly due to the coronavirus was found at Chicago airport after having lived there for three months.

Luckily, Roman made it back home safely, but he might be hesitant to set foot in an airport again after his ordeal.