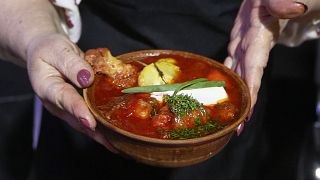 "Borscht" is a traditional beetroot and cabbage soup and could soon be officially recognised as a Ukrainian cultural heritage.

The country has nominated the popular dish for UNESCO's Intangible Cultural Heritage list.

Is Borscht Ukrainian or Russian?

Last year chef Levgen Klopotenko tried to convince authorities to put Borscht forward for nomination. But this caused controversy as in many places its name is synonymous with Russian soup.

Borscht, said Russian authorities, is "one of Russia's most famous and beloved dishes and a symbol of traditional cuisine".

Klopotenko disagrees, “A lot of things were taken away from Ukraine, but they will not take our Borscht”.

How do you make Borscht?

There are dozens of recipes for the soup because it's cooked in so many places. But the classic version uses beetroot, cabbage, potatoes, tomatoes, and pork or beef.

"There is no canonical recipe of Borscht, as there is no regional Borscht. However, there are as many recipes for this dish as many families are living here" says Klopotenko.

"These vary from region to region, from family to family, from house to house, from apartment to apartment. No doubt, Borscht is in our DNA” he adds.

NGO created to prove its origins

To prove that Borscht is more than just a dish for Ukrainians, but part of the national identity, Klopotenko created a nongovernmental organisation to gather evidence for his application to UNESCO.

Their application includes 700 pages of evidence that Borscht originated in Ukraine and is ingrained in the country's culture, featuring at events such as wedding and funeral, and consumed widely.

Ukraine expects that UNESCO will approve the decision in two years. During this time, Klopotenko is going to promote Borscht not only in Ukraine but worldwide.