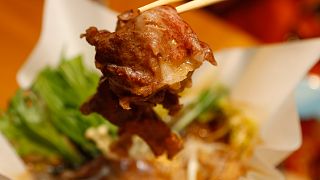 Tasting national cuisine and food specialties are one of the most enjoyable ways to discover different cultures.

Here are some foods and drinks mentioned in UNESCO’s Intangible Cultural Heritage List that focus on practices, representation, expression, knowledge, and skills considered to be a part of a place's cultural heritage.

When you’re traveling, don't miss the opportunity to discover these traditions or check how they are reflected in your own neighbourhood’s restaurant scene.

Pizza made by Neapolitan ‘Pizzaiuolo’

If you think pizza is boring, you haven't met a 'Pizzaiulo', or a pizza-maker from Naples. They keep the local tradition of cooking pizza, involving several stages, for instance, rotation of the dough and cooking it in a wood-fired oven. UNESCO recognises pizzaiuolo's work to be an art. These traditions are passed down in families and through courses organised by the Association of Neapolitan Pizzaiuoli.

Turkish coffee culture is a symbol of hospitality and friendship, irreplaceable when receiving guests or during important festive occasions. Roasted beans are grounded to powder. Then they are mixed with cold water and sugar (if the guest likes it sweet) in a special coffee pot made of copper called a cezve. Coffee is brewed on a stove (or sometimes hot sand) until it's about to boil - this creates the thick foam Turkish coffee is so famous for.

There are thousands of types of beer in Belgium and hundreds of breweries. The importance and cultural significance of the local beer production has been officially acknowledged by UNESCO since 2016.

Lavash is a traditional thin bread from Armenia made of wheat flour and water. Its preparation requires a lot of effort and skill. It is usually served next to cheese, vegetables and meat. UNESCO sees the preparation, meaning and appearance of this traditional bread as a cultural expression in Armenia.

This type of wine-making has been very common in Georgia for many centuries. Qvevri is a pottery vessel used for making, storing, and aging wine. The secrets of this tradition have been passed down through families and communities, as the wine plays a very important role in Georgian traditions of celebration.

Kimchi, produced by salting and fermenting vegetables, notably cabbage, is one of the staples of Korean cuisine. It's making and sharing - Kimjang - is the officially acknowledged part of South Korea's cultural heritage. In homes, this side dish is traditionally prepared in late autumn. The cooking process can strengthen ties within the family, the skills and secrets of its preparation would be shared in the neighbourhood.

The French art of taking food seriously is famed around the world. Unsurprisingly the cultural importance of France's gastronomic tradition has been recognised as an important intangible part of the country's cultural heritage. Usually reserved for a special occasion or celebration, a gastronomic meal should have a defined structure, comprising of an apéritif, followed by at least 4 courses.

The Mediterranean diet, recognised as part of the cultural heritage of Cyprus, Croatia, Spain, Greece, Italy, Morocco, and Portugal, refers to skills and traditions for all of the stages of food preparation, from harvesting to sharing and consumption. This local food culture is based on fresh vegetables and fruits, cereal, nuts, olive oil and of course, some fish, meat and a little diary. The local markets in Mediterranean countries are something not to be missed, as their role in preserving and reinforcing these traditions cannot be overestimated.

Washoku, traditional Japanese cuisine, is beautifully served multi-course food which recipes date back for centuries before the influence from the neighbouring countries started to permeate the country. It preaches the use of natural resources and local, seasonal food.

Traditional Mexican food is another national culinary practice that has been acknowledged in the cultural heritage list. It's all about the old cooking techniques as well as the farming and sharing of food. The key ingredients are corn, beans, chili, avocado, tomatoes, cocoa, and vanilla.

Once combined with centuries-old skills, there is a lot to discover.

Soup-erpower? How Borscht is causing a spat between Russia and Ukraine