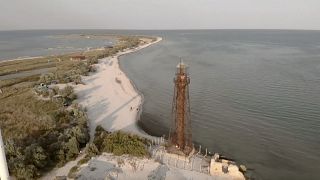 Dzharylhach: a preserved and uninhabited island in Europe
By Katy Dartford  •  Updated: 25/09/2020

Dzharylhach Island, in Ukraine, has never been settled by humans, making it one of the most pristine ecosystems in the region.

Stretching 56 square km, the island is nestled between mainland Ukraine and the Crimea peninsula.

"What do I feel here? Peace of mind. I am retreating from our hi-tech world. To be honest, I want to feel something primary and wild, to feel myself real human, not a robot" says Volodymyr Rotar, a tourist from Western Ukraine.

This summer, tourists visit in high numbers, but 99% of the island's precious flora and fauna is still off-limits to humans.

In 2010 the island received the status of National Park and hunting was banned.

Dzharylhach is home to 200 sika deer and 170 fallow deer, three of which are albinos. In the autumn some of the deer are moved to other national parks.

Wild sheep known as mouflons make up the largest of fauna on the island and considered to be one of the two ancestors to all modern sheep.

Foxes and wild boars also make their home on Dzharylhach.

In the sea, three types of dolphin can be seen from the shore, the Black Sea bottlenose dolphin, the short-beaked common dolphin and "Azovka", subspecies of harbor porpoise.

Since 1902 lighthouses have guarded the coast, but only a team of three rangers remains here throughout the year.

The original lighthouse with its distinctive metal structure was designed by a student of Gustav Eiffel (that's why it looks so familiar) and was operated by a live-in lighthouse keeper.

It was in operation until 1997 when a new automatic lighthouse was built.

The first tourists appeared on Dzharylhach in the 1990s, when only small boats transported them.

Now two steamboats bring up to 800 tourists, three times a day, but only 30 percent stay overnight.

"Our soul relaxes here. It's almost impossible to find such an island in Ukraine, unfortunately. But here is freedom." says Anatoliy Skachkov, a tourist from Kyiv.

Perfect for a short trip, Dzharylhach is a unique spot to visit in Eastern Europe.

Have you ever heard of Dzharylhach Island?

This Ukrainian beetroot soup could be officially recognised by UNESCO

Soup-erpower? How Borscht is causing a spat between Russia and Ukraine