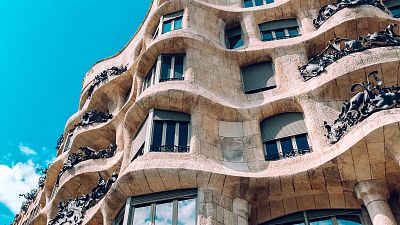 Artists express themselves through their homes - and this list is no exception   -   Copyright  Florencia Potter / Unsplash
By Euronews Travel  •  Updated: 15/03/2021

Have you ever looked at a painting and wondered what the artist’s life and times were like? While you can’t transport back, you can get pretty close if you pay a visit to these famous artist’s homes. Here, we explore the places where Claude Monet, Frida Kahlo, Salvador Dali and Lord Frederic Leighton lived and created some of their most famous works.

Claude Monet lived here with his family from 1883 until his death in 1926, and it offers an intimate look into the Impressionist painter’s life. It’s a family home, once filled with the noise of eight children, and covered in climbing roses and creepers. Inside, Monet’s family home has been restored as faithfully as possible. In addition to his own works, visitors can see Monet’s impressive collection of Japanese engravings.

Monet decorated all the rooms in the house in vivid colours. Some, like the blue sitting room or yellow dining room, feel like stepping inside one of his paintings.

Outside is just as much of a treat for art lovers. Monet liked to work outdoors: the honeysuckle-scented gardens are filled with the flowers he loved, as well as the water lilies, Japanese bridge and weeping willows immortalised in some of his most famous paintings.

Aristocratic artist Lord Frederic Leighton renovated his house to become a ‘private palace of art’. Although the contents of his house were sold after the artist’s death, the museum has restored its interior and collection to resemble how it was during Leighton’s lifetime. Oil paintings, sculptures and work by Leighton’s 19th-century contemporaries are all on display: some of the museum’s most breath taking works of art however, are architectural.

Sweep down ultramarine-blue staircases or marvel at rooms like the magnificent Arab Hall, a golden-domed treasure trove lined with mosaics and intricately-painted Islamic tiles. Upstairs is a vast studio where Leighton played host to the great and the good of London, from artist friends like Dante Gabriel Rossetti to Queen Victoria herself. Light floods in through a north-facing window and Leighton’s paintings and sketches line the walls – an art lover’s paradise.

One of Mexico City’s most visited museums, the Frida Kahlo Museum is also known as the Blue House after its vibrant blue walls. This is the house where Kahlo was born (in 1907), lived and died (in 1954).

After her death, Kahlo’s husband Diego Riviera carried out her wishes that the house be made into a museum as a gift to the people of Mexico. It’s filled with photographs, letters, memorabilia and the couple’s personal possessions, including Kahlo’s distinctive colourful dresses.

As you’d expect from two artists, the house is also filled with artworks. Kahlo and Riviera’s own paintings rub shoulders with pieces by their contemporaries and the Mexican folk art which inspired them both. Huge papier-mâché sculptures loom over visitors, and lush tropical plants adorn the courtyard garden.

Riviera and Kahlo entertained a variety of illustrious guests in this house: stroll around rooms preserved almost exactly as they would have been when Kahlo welcomed people like George Gershwin, Leon Trotsky and Nelson Rockefeller to stay.

Set just outside the sleepy fishing town of Port Lligat, Dali’s house is everything you’d expect from the master of surrealism himself. A rambling, honeycombed construction, it began life as a fisherman’s hut and evolved organically during the artist’s long residence (from 1930 until 1982, when he moved to Púbol Castle).

Today, its whitewashed exterior and gardens are dotted with sculptures and art installations (think huge alabaster eggs, grand pianos and a penis-shaped pool). Inside, it’s a jumble of surreal artworks, staircases that curl upwards to mezzanine floors, unexpected sea views and hidden cubbyholes containing a miscellany of treasures – from beach-combed driftwood and feathers to skulls, masks and statues. Dali was interested in taxidermy: a stuffed polar bear greets visitors at the entryway and three swans (once treasured pets) are frozen mid wing-beat in the library.

Despite the artist’s flamboyant side, the museum gives glimpses of a quieter life. Dali was drawn to the area’s rocky coastal landscape and light, and what he termed its ‘geological peacefulness’. He had a mirror installed in the bedroom so he and Gala (his wife and muse) could watch the sun rise as they lay in bed.

Covid-19 note: travel restrictions are currently in place for most countries due to Covid-19. Points of interest and attractions may be closed. Always check websites and government advice before you travel.

How Ancient Roman ruins can teach the world about accessible travel

5 'European' towns and villages that aren’t in Europe