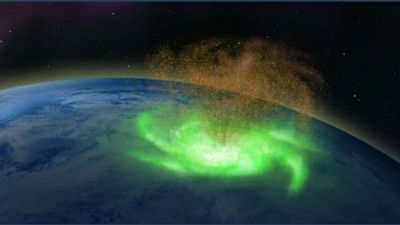 For the first time, an astrological phenomenon called a ‘space hurricane’ has been detected in the Earth’s upper atmosphere, a few hundred kilometres above the North Pole.

What’s the difference between a space hurricane and the hurricanes we know on Earth?

In its formation, a space hurricane has a lot of similarities with those that we experience on Earth: a swirling mass of energy, but instead of raining water it omits electrons. In a statement from the University of Reading, Professor Mike Lockwood, space scientist, said, “Until now, it was uncertain that space plasma hurricanes even existed, so to prove this with such a striking observation is incredible”.

The discovery is so significant because it happened in the upper atmosphere - proving that hurricanes and other extreme weather patterns we experience on Earth aren’t exclusive to our solar system. Hurricanes have been observed in the lower atmospheres of Mars, Jupiter and Saturn too. These occur close to the surface of the planet - for example, Earth hurricanes are usually over warm bodies of water. When humid air rises, it creates an area of low pressure near the surface that sucks in the surrounding air, causing strong winds and heavy rain.

How will the information be used?

The project has been led by researchers at China's Shandong University. They believe the information will help us further understand the relationship between planets and the atmosphere.

The hurricanes are thought to lead to other space weather effects, like increased satellite drag, disturbances in high frequency radio communications and errors in radar location, satellite navigation and communication systems.

How was the moment captured?

The satellite footage of the hurricane is actually from August 2014, but it was only discovered in recent analysis by scientists based at the University of Reading, UK. The research has produced an illustration of the 1,000 kilometre wide and several hundred kilometres above the North Pole.

The analysis involved checking data from the satellites, radars and other sources for absolute clarity and certainty. It’s believed the hurricane lasted almost eight hours before gradually breaking down.