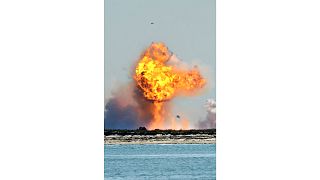 But this is the second time in a matter of months that a test flight has ended in a fireball. In December, another one ended in spectacular fashion.

On Tuesday, the rocket reached its intended altitude of 6.2 miles (10 kilometres), slightly lower than the last one.

Everything seemed to be going well as it flipped on its side and began its descent.

But it did not manage to straighten itself back up in time for a landing and slammed into the ground.

“We've just got to work on that landing a little bit,” said SpaceX launch commentator John Insprucker. “Reminder - this is a test flight.”