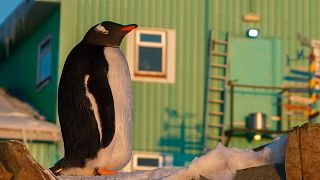 If it wasn't for the COVID-19 pandemic, this would be the high season at the Ukrainian Vernadsky Research Base off the west coast of Antarctica.

During the summer season, from December to March, the base would usually receive 5,000 tourists, most of them from Antarctic cruises.

Today, when it's not possoble to visit in-person, we take you on a virtual journey to this Antarctic research base.

How are those at the far end of the planet spending their time? What are they researching? What do they do during their downtime? How do they keep warm? And why do they wear tuxedoes once a week?

The station’s story and its team

The research base, which is stationed on the Argentine Galindez Island in the Wilhelm Archipelago, was originally named the Faraday Station. It was given this name by the British, who founded the station in 1947. Almost 50 years later, in 1996, it was handed over to Ukraine. This month marked the mission's 25th anniversary.

There is a polar research team at the base year-round, with 11 team members currently onboard, including geophysicists, biologists and hydro-meteorologists.

The station’s biologist Oleksandr Salhanski explains what they are working on at the moment: "The focus of our current research is the penguin colonies and the biodiversity of the surrounding islands. The bacteria and plankton tell scientists about climate change."

The team monitors marine mammals and birds, studying their feeding behaviour, and also the diets of local fish. The influence of sea lions and penguins on the local flora is also on Oleksandr’s agenda.

Photo identification of species is also carried out for research and catalogisation.

"Antarctica is the only continent that has not been anthropologically influenced and has remained as pristine as it was millions of years ago. Studying its history, we might find the keys to our future," said the leader of the 25th Antarctic expedition, the geophysicist Yurii Otruba.

"For instance," he continues. "The icebergs and glaciers of Antarctica affect the climate of the entire planet. We study the ozone hole, we observe near space, the ionosphere, conduct some meteorological and glaciological studies."

When not conducting research, polar explorers have to make sure their training in fire safety and surviving extreme weather is up to date.

To keep the team entertained during downtime, the station has a bar, a pool table and a library. Previously, tourists were able to send postcards from the base. But the station is currently only connected to the outside world via the internet.

The team brings food supplies for the year with them to the station. They call their menu "continental" and similar to what they would eat back home in Ukraine. Porridge, soup, omelettes, steak and fish are among their favourite meals. Dairy products such as cheese, yoghurt and sour cream are whipped up using dried milk.

Because the shipways are blocked by ice during the winter months, fresh fruit and vegetables are off the menu from October to the middle of February. At that point, some treats arrive with the summer expedition which joins the main team for a couple of months.

The team gets dressed up in evening gowns and suits every Saturday evening, upholding a tradition established by the former British occupants.

It is currently summer at the base, when temperatures move between a few degrees below to a few degrees above zero, hydrometeorologist Ihor Artemenko tells us. In winter temperatures can fall to -25°C, but tend to average -5°C and -15°C.

Inside the invisible holiday home that mirrors the Californian desert