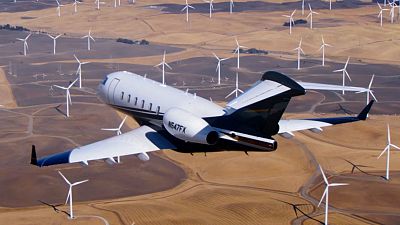 Private jet shared ownership provider Flexjet has a new sustainability programme for its European operation, including a 300% carbon dioxide equivalent offset for every flight   -   Copyright  Copyright Business Wire 2021/via AP
By Euronews  with AP  •  Updated: 28/05/2021

Demand for private jets is surging in Europe after a brief slump during the COVID-19 pandemic, leading to warnings that flying privately is far worse for the environment than taking a commercial flight.

The European Federation for Transport and Environment (T&E), which campaigns for clean travel, says private jets are ten times more carbon-intensive than airlines on average, and 50 times more polluting than trains.

A four-hour private jet emits as much CO2 as an average person in an entire year, it says.

“Flying on a private jet is probably the worst thing you can do for the environment. And yet, super-rich super polluters are flying around like there’s no climate crisis," said Andrew Murphy, aviation director at T&E.

Demand for private jet travel up across Europe

Demand for the high CO2 emitting travel option is up, with a 31% increase in European private jet emissions between 2005 and 2019.

There was a slump in flights as the global pandemic hit in early 2020, with the average daily number of European flights in business aviation - including owned and rented private jets - going down to 521 in April.

But in August 2020, there was a return to an average of 2,133 flights every day across Europe, and private jet usage was at near-pre-COVID levels into April this year, T&E revealed.

Routes between UK, France, Switzerland, and Italy account for most of the carbon pollution, with private jets departing from the UK and France accounting for more than a third of all private flight emissions in Europe.

In the UK, inquiries into private jets and charter flights are surging, operators say.

“With the impact of commercial travel and opportunity to travel commercially, business aviation has given that opportunity for London and Farnborough and the South East to connect from an economic [...] with partners in Europe,” said Dominic Osbourne, Farnborough Airport FBO director.

“Last summer from UK departures and arrivals it was actually very busy because the airlines didn’t have the routes or the frequencies or capacity at all, but people still needed to, or actually wanted to fly," he said.

So what’s the solution?

T&E suggests that to ease the damage from private emissions the sector should expand its use of green fuels and tax those who don’t.

“Short hops are prime targets for replacement by clean technologies like electric and hydrogen aircraft. European policymakers need to urgently start taxing fossil-fuel-powered private jets and ban their use by 2030.

"The revenues raised from the super-rich could be invested in greener technology that could clean up flying for everyone.”

Some commercial airlines such as Air-France-KLM are already embracing biofuel technological innovations. It flew its first long-haul flight from Paris to Montreal powered by sustainable aviation fuel, petrol mixed with synthetic jet fuel from waste cooking oils, on May 18. A start on its way to a commitment to make 5% of its fuel sustainable by 2030.

Environmental organisations however have expressed concern though that airlines will not make enough of a dent in global emissions just by adding a small amount of agrofuel or biofuel.

Agathe Bounfour of Climate Action Network in France said: “We need a drop in air traffic in order to comply with climate goals.”

T&E also points out that private jets are currently untaxed in most European countries because of exemptions from the EU’s carbon pricing scheme and untaxed kerosene.

But a jet tax fuel applied proportionately to flight distances could raise €325 million if applied to all flights departing from the EU and UK, providing revenue to accelerate decarbonisation of the aviation sector.

Post-pandemic travel trends and what they say about us