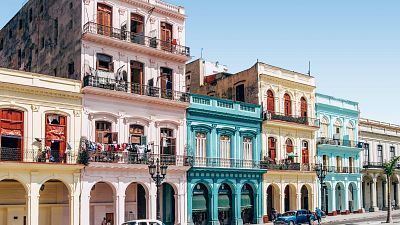 Cuba is most recognisable by its colourful architecture   -   Copyright  Spencer Everett / Unsplash
By Euronews Travel  •  Updated: 17/02/2021

Popular with tourists around the world, the Caribbean island of Cuba is known for its colourful culture, miles of beaches, salsa, and, how could we forget, rum.

But it can be difficult to know where to visit on your trip, especially if you’re pushed for time.

So we’ve made it easy for you.

Should you prioritise culture or history? What are the most jaw-dropping tropical beaches? Any must-see museums? Read on and all shall be revealed.

Most tourists will fly into the capital city, Havana. But to explore the authentic culture and history of Cuba, head to the neighbourhood of Old Havana The unique buildings, bohemian vibes and Latin rhythm of the streets are the perfect introduction to this unique country.

Once known as the ‘key to the new world’, the entire island was a crossroad for explorers and colonial powers, with Old Havana the central hub because of its coastal location and bay which made for the perfect trading port.

Interestingly, Havana was once located in the south of the island, but the bay made for an opportunity too good to be missed. So in 1519, the capital city was relocated to the north.

In Old Havana, you’ll find street artists trying to capture the moment from behind their easel, and musicians playing down narrow streets and in town squares, setting the pace for the day.

Rum, cocktails and - if it’s your bag - Cuban cigars in the sun are a must on this part of the island.

Alejandro de Humboldt National Park is a UNESCO World Heritage site named after the German scientist, famous for his work in biogeography - the study of the distribution of species and ecosystems. Humboldt visited the island in the 1800s.

The park is home to one of the most important ecosystems in the Americas. It’s one of the most biologically diverse tropical island habitats on Earth, and the most humid part of Cuba.

You can take a guided tour of the island’s endemic plant species, and sights including the 25 metre high Santa Maria waterfall.

As most of the rocky terrain is toxic to plant species, they have adapted to survive - meaning there are a lot of new variants unique to the park.

This is the perfect day trip for hikers, accessible from nearby towns Baracoa and Moa. Allow a full day to see the whole park.

Playa Ancon is widely considered to be the most beautiful beach on the south coast, 11km from Trinidad. The white sands and crystal clear waters belong in a travel brochure.

If you’re a shade-seeker, trees along the beach provide shelter from the heat. You can also hire a palm tree umbrella.

The best time to visit is December - May: the island’s dry season. From June through to October, Cuba sees a lot of rainfall and occasional hurricanes.

The Fusterlandia Museum is Cuba’s answer to Gaudi. Artist Jose Fuster reclaimed his neighbourhood and transformed it into a folk art feature of the island.

Bright, colourful mosaics and child-like illustration give the surroundings a quirky charm, reflected in the laid-back, friendly attitude of the local people. It’s located on the outskirts of Havana, and is completely accessible from the main city, making for a fun morning or afternoon art trip.

Jardines de la Reina is an archipelago off the southern coast of Cuba, and offers an ideal underwater landscape for divers.

It was actually named by Christopher Columbus in honour of the Queen of Spain. For those interested in the underwater world, it includes canyons, pinnacles and caves, home to a vast array of wildlife including mangroves, reef sharks and crocodiles.

As a whole, Jardines de la Reina is one of Cuba’s largest protected areas.

The Bay of Pigs

Another great snorkelling spot, the Bay of Pigs is perhaps most famous for the failed, US-supported invasion of the island by Cuban exiles in the 1960s. The Museo de Playa Girón explains this complicated historical backdrop to the area.

Though steeped in history, the bay has been reclaimed by nature, and now provides tourists with an untouched canvas, warm sea and friendly locals.

Nearby national park Cienaga de Zapata - the island's hidden secret - and various offshore diving sites provide a day or two’s entertainment even if history isn’t your thing. There’s also a crocodile museum if that floats your boat.

Cuba recently made headlines because it announced that doctors had pledged to offer a COVID-19 vaccine to incoming tourists, if they so choose.

Currently, arrivals must quarantine for several days at their own expense. Find out more about different COVID-19 measures around the world here.

8 reasons to put Cardiff on your travel bucket list