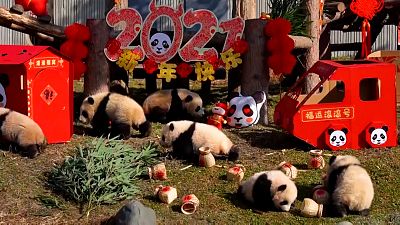 At the China Conservation and Research Centre for Giant Pandas in Wenchuan County, Sichuan Province, these panda cubs have just made their first public appearance.

As the baby pandas were presented to the cameras, one appeared shy and covered its eyes with both paws when it saw the crowd, while the other went rogue and crawled away from its keeper before getting caught.

The black-and-white fluff balls, each in the arms of a keeper, appearanced in a playground with New Year decorations including lanterns, Chinese knots, paper cars and flags.

A number of bamboo baskets embossed with the Chinese character "fu," meaning good fortune and blessings, were prepared for the pandas, to replicate the tradition of adults giving red envelopes with money inside to children during the Lunar New Year - a way of offering good wishes and blessings.

Instead of money, the baby pandas were being given snacks. Some of them were very curious about the baskets, while others got distracted by the toys nearby. Their ages range from four to six months, and all of them were the product of a natural mating process, according to the keepers and researchers.

As of December 2020, there were just 44 panda cubs worldwide, and more than half of them were bred in China. The country is home to more pandas than any other, and champions its achievements in the preservation of this endangered species.

"Newborn baby pandas from the class of 2020 at China Conservation and Research Center for Giant Panda wish you a happy New Year and lots of good luck in the Year of the Ox," the keepers shouted to onlookers with the pandas in their arms.

We think this is the perfect way to see in Chinese New Year. Watch our video for more, and tell us how you’re celebrating at home on Twitter @euronewstravel.