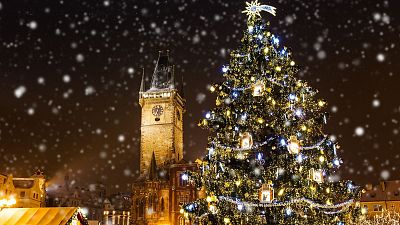 As many European countries are set to remain in tight lockdown restrictions over the holidays, some escapism (even if it’s virtual) is in order.

From the home of Santa himself in Lapland to nutcrackers and ice-rinks in Canada, we’ve found the top locations to help you reminisce about cosy winter times.

Nothing gets more Christmassy than the home of the man himself.

Santa Claus Village lies just outside the beautiful town of Rovaniemi, the capital of Finnish Lapland, and eight kilometres north of the Arctic circle.

Nestled beneath a twinkling blanket of snow, you’ll find a cluster of quaint wooden buildings, that are straight out of a nativity scene. It’s possible to stay in these buildings, which means you can sleep next door to Santa.

Ice skating in Central Park, gift shopping in Macy’s and, of course, watching the ball drop in Times Square on New Year’s Eve are just some of the end-of year highlights you can enjoy in New York

You can also get lost in LuminoCity's Magical Wonderland of Lights, take selfies by the enormous Christmas tree outside the Rockerfeller centre or enjoy breathtaking views of the city from your own private rooftop igloo.

The capital of West Flanders in Belgium is transformed into a fairytale town around Christmas time with its annual Winter Glow festival.

This UNESCO World Heritage city in Belgium floods the senses with a spectacular display of lights strewn across its Medieval buildings.

The theme of this year’s Winter Glow festival is ‘Connection’ - the perfect antidote to a year of social distancing.

And even if you’re not in Bruges, you can still take part in the experience with a 360 tour of the fantastic light displays.

Reindeers and Northern lights in Tromsø

Nothing says Christmas quite like an escape to the Arctic circle.

Tromsø’s historical centre is characterised by its centuries-old wooden buildings and the Arctic Cathedral, built in 1965. These buildings are the epitome of Christmas as the snow sparkles on top of them.

At night, the Norweigen city is illuminated by the green hues of the Northern Lights dancing across the sky.

You can also experience the life and culture of the earliest settlers in the European Arctic - the Sami - and pay a visit to their friendly reindeer.

Imperial architecture and strolls along the Danube: Austria’s capital is fabulous any time of year. But at Christmas time, it’s especially magical.

A walk around Vienna’s twinkling Christmas markets will fill your nostrils with the glorious smell of mulled wine and roasted chestnuts.

Whilst sampling some of the delicious food at the markets, you can spot the infamous giant red baubles about the city, which are a traditional fixture during Advent in the city.

For Christmas traditionalists, the Vatican in Rome is a spectacular sight in December.

This year, a 26 meter Christmas tree, which comes from the forests of Rotzo in northern Italy, graces the square. There’s also a beautiful nativity scene outside the Vatican which is sure to get you feeling nostalgic.

During normal times, you would be able to attend midnight mass at the Vatican. But this year, it will be broadcast on TV and online to comply with Italy’s strict COVID-19 regulations.

Nutcrackers and ice-skating in Montréal

Montréal is the largest City in Quebec, Canada. Honestly, walking round this city, you’ll feel like a character in your favourite Christmas movie.

You can try ice-skating on the frozen ponds of Parc La Fontaine, which plays host to outdoor concerts during the summer months, or browse the Christmas markets for a traditional wooden nutcracker.

If you’re staying into the new year, you’ll be around to see the snow arrive in mid-January, which is when the temperatures drop down to as low as -12 degrees celsius.

Tell us about the most Christmassy place you've visited. Tag** us on Twitter @euronewstravel.**

Your Christmas gift guide for the eco-conscious traveller

Beer and bikes: A Brit's guide to Belgium