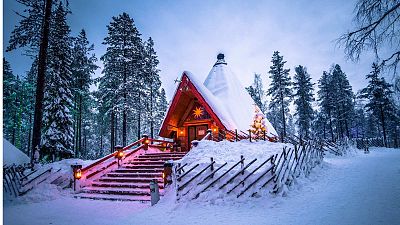 The Christmas season has officially begun in Finnish Lapland, but Santa's helpers could be at risk of losing their jobs as the pandemic cuts visitor numbers by 90 per cent. Don’t worry though, Saint Nick has a plan to keep the magic of Christmas alive.

Santa Claus village is based eight kilometres north of Rovaniemi, the capital of Finnish Lapland, and usually sees upwards of 500,000 people visiting each year.

Christmas is peak season for Rovaniemi, when families flock there for some festive cheer and - most importantly - to meet Santa. But this year, things will be different as the world remains in the grip of the coronavirus pandemic and tourism plummets.

"The number of foreign travellers has been so huge in past years. And now the fact is that we're facing quite serious restrictions in travel. And that affects, of course, the number of foreign travellers who can come here,” explains Sanna Kärkkäinen, Managing Director of Visit Rovaniemi. “I guess Rovaniemi will be a little bit different this year.”

Rovaniemi has tried to adapt by introducing safety measures: face masks, hand sanitiser and social distancing. It will also be limiting visitor numbers at each Christmas attraction. But with global travel seriously curbed, there’s little chance of overcrowding.

Normally, between 50-60 thousand visitors would spend at least one night in the city during the Christmas season. But this year, global travel restrictions mean few will be making the international journey. And that’s going to leave a big hole in the pocket of Rovaniemi's economy.

Kärkkäinen says they expect just 10 to 15 per cent of the visitor numbers they welcomed last year: "If we look at the tourism revenue loss in Rovaniemi itself, it's going to create something like 200 million euros loss, which is an awful lot of money," she says.

This will have a knock-on effect for the staff: “At the moment, if there is no work available, the companies can't keep their valuable staff. So they're going to be layoffs for sure," she says.

British tourists are the major market for Rovaniemi, as well as travellers from France, Italy and Spain. Further afield, China, Singapore, Australia and the US are important sources of tourists too.

Domestic tourism may go a small way to make up for lost trade. There’s also the hope that travel restrictions might ease in the coming weeks, allowing some overseas visitors to cross the border.

For children, perhaps their biggest concern is whether the pandemic will stop Santa from delivering their presents. But the man himself has told us not to worry.

"We here at the Arctic Circle in Rovaniemi in Lapland have been preparing extremely well for this Christmas as always, and we are all healthy and waiting for our big journey around the world," he says.

"This Christmas, we are going to need so much of our Christmas magic. And do you know how we get the magic of Christmas? When people are having happy thoughts, and also when you follow your social distancing rules and public health recommendations and everything like that, that makes us the magic of Christmas." Says Santa.

And in a year that has brought anxiety to people both young and old, he has some advice on how to have a little Christmas spirit, no matter what is going on in the world.

"The situation around the world is quite a special situation at the moment, but we can be close to each other in new ways," he says.