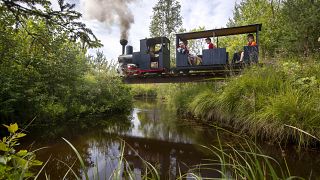 Pavel Chilin has spent more than 10 years to build his long-held dream of a railway complete with its very own steam locomotive.

The 350-metre-long narrow-gauge steel rail line twists through the grounds of his cottage outside Saint Petersburg.

It has branches, dead ends, circuit loops and even three bridges.

The design of the steam train is based on a classic from the early 20th century.

Chilin made all this with the help of a few other enthusiasts and railway fans.

Curious neighbours brought him metal and some other materials.

"The most difficult thing about such projects is to resolve upon doing it, to gauge one's strength and to take all your efforts to complete it, all the other technical things are just engineering issues, they are done during the work process," Chilin said.

"There is one more little secret: to switch off your computer and a smartphone for a while in order to be able to concentrate (on one important thing)."

Chilin's pet project has become a day out for adults and children who come to test the train and enjoy its leisurely journey.

The visitors couldn't be more impressed, although some found the ride a bit nerve-wracking.

"It's very interesting, I have ridden steam trains before and in a train driver's cabin (as a passenger), but it's (this time) a very interesting experience. It's very scary to cross the bridge," said Marina Abramova.