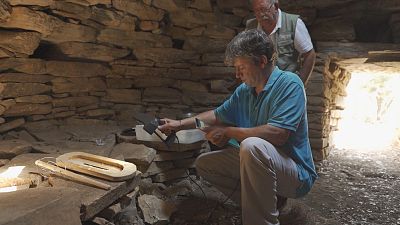 A project called Mingei is exploring the possibilities of representing and making accessible both tangible and intangible aspects of craft as cultural heritage.

In this week's episode of Futuris, Euronews finds out more about this project and how technology is helping to engage the younger generation with heritage crafts of the past - on where they originated from and how things were created years ago.

Euronews visited a traditional 19th century dry-stone shepherd shelter in Crete, Greece, where one man, Alekos Ntgiadas, makes cheese - the way it has been done for generations.

"Almost all families in the area, 85% of the people here, were shepherds. Each family had their own animals, and their own sheep shelters. And they were making their own products. So in those years almost everybody was producing milk. In our family we had goats as well. I still have goats, because I continue the tradition of my own family," he explained.

Computer scientists from the European research project also visited Alekos to monitor how he makes the cheese and create a database of information on it that can then be used to teach others.

"We are firstly using scanners to study the tangible objects of the cultural heritage. Secondly, we record the movements so we can mimic and recreate the gestures they do while exercising their crafts. And thirdly, and very importantly, is that we semantically recreate the cultural contexts and historical processes, the values and the collective community memories in which the crafts were born," Xenophon Zabulis, a computer scientist from the Foundation of Research and Technology-Hellas, explained to Euronews.

As well as cheesemaking, researchers are also creating a database on woolen textile knitting and dying, glass blowing, traditional pottery and silk weaving.

Interactive augmented reality and mixed reality tools are being used to relate the traditional activities to the diverse historical and geographical environments where they developed.

"We had to work on a general methodology for the acquisition of data of all these traditional crafts and to showcase them. This was difficult. We had to simultaneously focus on this methodology - for instance, discussing with crafters and understanding how our approach applied to their needs, and at the same time, we had to create the technical tools needed to achieve our goals.That was a great challenge," Nikolaos Partarakis, a computer scientist on the same project, explained.

In order to interest the younger generation in traditional crafts, they are being presented to them in innovative ways, like through interactive books and virtual postcards.

"We created these applications so we can make the results of our research more reachable and more comprehensive. Our research has to be more playful to attract the audience. In order to maintain the traditional crafts we must draw the interest (of the audiences) in different ways. We have to modernise the stories," Xenophon Zabulis added.