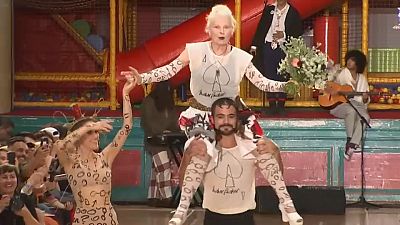 Vivienne Westwood has a new collection, and, stone the crows, is over the moon about last week’s election upheaval in the UK.

How do you get Britain’s grande dame of fashion to talk about clothes at a time like this? Well, you don’t, and she belies her 76 years bubbling with enthusiasm for the Labour leader.

“Young people voted for him and Jeremy Corbyn won the future. He’s won the future and he will get in next time and then meanwhile the opposition is so much more important than the government because he’s not going to let them do what they’re trying to do and he’s going to get in and we can work through Jeremy Corbyn. It’s just really a thing of hope.”

Revolutionary Vivienne also has sharp words for the fashion-conscious:

“Buy less, choose well, make it last.’ That is the only sustainable thing, don’t create the problem in the first place. It’s all dependent on the public choosing good things instead of buying lots and lots of rubbish. So we want quality not quantity and that is sustainable.”

Of course quality costs yet Westwood’s clothes don’t shout money, in fact they have always had a language of their own.