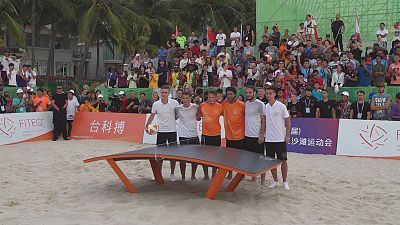 Sanya, in the far south of China’s Hainan Island, is known as a place to holiday – with its plentiful beaches and all-year-round warm weather.

But it’s also growing as a destination for events, conferences and exhibitions, with investment in the sector bringing world-class facilities and thousands of new visitors.

The annual Hainan Island International Film Festival drew top names from China and across the globe.

They included the British film director Simon West, who was visiting for the first time.

“I’ve heard about this beautiful island for several years and been trying to get here,” he said. “I’m always looking for beautiful places to film and this is a fantastic island. So, I am so glad I eventually came here, even if it’s just for the festival. But I bet I’ll be back to shoot a movie.”

More than 3,000 Hainanese living in 28 countries returned recently for a World Congress at the Mangrove Tree Resort World Sanya Bay.

Xueshen Feng, vice-president of the Hainan Association of France, was there to promote ties.

“For a small island, it's really developing. And we're looking for business opportunities," he said.

Yong Su is responsible for managing international meetings and events at the resort.

Alongside hotels, Sanya is getting a new international convention and exhibition centre.

Due for completion in 2020, it will help meet future demands in this growing industry.

Outside events are big business too. The city will play host to the Asian Beach Games next year.

They will bring 4,000 athletes from across the continent, competing in everything from volleyball to kite surfing.

Some of them will battle it out in Teqball - a new sport that looks like a cross between table tennis and football. You can hit the ball with everything except your hands.

Brazilian football star Ronaldinho is its global ambassador and he was recently in Sanya to promote the sport ahead of the Games.

“It’s a sport that is about to arrive and soon will dominate the world. It’s marvellous,” he told Discover Sanya.

Kaizhong Ye, Deputy Secretary General of Sanya Municipal Government, said: “By holding a successful event and enlivening the city, the Asian Beach Games will elevate Sanya’s cultural tourism and sports scene. At the same time, they will drive infrastructure construction – striving to take the city’s services to the next level. Allowing everyone to see a new Sanya.”

Living the expat life in Sanya

China’s Hainan Island leading the way for health and wellbeing