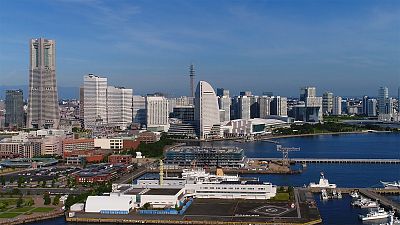 On this latest episode of Metropolitans, Euronews visits the vibrant Japanese city of Yokohama, host to some of the most anticipated fixtures of the 2019 Rugby World Cup.

With a capacity of around 72,000, the International Stadium Yokohama is the biggest in Japan. It is sure to keep fans on the edge of their seats with both the semi-finals and the showpiece match taking place there.

But the city’s relationship with rugby started long before this year's tournament: Yokohama is credited as the birthplace of rugby in Japan with matches reportedly being held as early as the 1860s at the Yokohama Country and Athletic Club.

Alex Hendy arrived in Japan in 1991 and is a member of the club:

''It was established initially as a cricket club in 1868 but pre-dating that, actually, there was a rugby club in the town; it was called the Yokohama Football Club and those players would eventually use the cricket ground as would baseball players, athletes. So the Yokohama Country and Athletic Club, as we have become, was the incubator of many western sports here, including rugby.''

Hendy says he expects the World Cup will help inspire young people in Japan to follow the game - and maybe even start playing.

"It's a terrific game, as we all know, and its exposure and its inspiration is going to make a big difference I think. There's a good grassroots movement of rugby. We actually have a good young rugby club here. But I think when people see the top athletes here on their home territory, they're going to be inspired.''

With a population of around 3.7 million, there is much more to Yokohama than rugby: amazing attractions, a wide variety of shops and a thriving culinary scene.

Sankeien is a traditional Japanese garden and offers a break from the bustling city. It is renowned for the way its beauty changes with each season.

It was designed by Sankei Hara, a successful silk merchant, who lived here with his family before opening the park to the public in 1906.

Miori Hara is one of the garden’s guides and she knows its every nook and cranny.

‘’In this garden you can appreciate the harmony between traditional architecture and nature," Hara says. "Mr Sankei designed this garden and featured buildings from all over Japan, which have been officially recognised as properties of great cultural interest.’’

Over the years, Yokohama has evolved from a small fishing town to a modern and inspiring city. Today it is well known for its numerous shopping malls, high-rise buildings and its dramatic skyline.

During the rugby World Cup, visitors will be encouraged to wear the traditional Japanese kimono. This timeless and sophisticated garment will help them to immerse themselves in the deeply rooted culture of the country.

As night falls, the streetlights reveal one of Yokohama's many hidden gems: Noge.

The neighbourhood's old taverns and bars are nestled amongst the latest gourmet restaurants and visitors can soak up the atmosphere as they stroll through these narrow streets.

During the postwar Allied Occupation, Yokohama became one of Japan’s most progressive cities. The troops eventually left but the American influence remained to the delight of jazz fans and local musicians such as Shu Asaoka.

''Yokohama is not like Tokyo," Asaoka says. "There's like a very special atmosphere because it's not like a sightseeing place. There are no temples, no sea but the local people live right here in this town, Noge. It is very local. If you want to feel real Japan, you should come to Noge.''

No visit to Yokohama would be complete without paying tribute to the city's anime and manga culture.

Every year, thousands of Pikachus march and dance in perfect unison as part of a week-long festival which first took Japan by storm in 2014.

Yokohama has been an important trading port since 1859 and was one of the first cities to connect Japan to the rest of the world. With this in mind, visitors can take a short trip out to sea to fully appreciate the size and splendour of the city.

From the tranquility of the historic Sankaien garden to the noise and excitement of Noge and the Minato Mirai district, this city really does have some

How a clash of cultures transformed Tokyo's Harajuku district