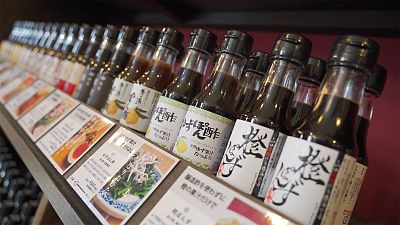 In this edition of Taste, we’re exploring a must in Japanese cuisine; soy sauce, or "shoyu," the ubiquitous condiment that brings 'umami' - the Japanese fifth flavour -that's savoury and pleasant.

Soy sauce is for Japan comparable to wine for France; there are between 1,000 and 1,500 producers in the country.

His Shiro Shoyu has the clearest colour; "from there, the shades become darker because they are aged longer," he explains, "This one has the most powerful aromas. It is tamari."

The ripening, but also the share of soy, salt, and wheat determine the flavour and colour of each shoyu.

The nuances are striking.

Fumiyasu Ookubois is a producer from the Nagano region and shoyu has been part of the family history for 133-years.

"My father often said, "you have to do the right thing and wait ": one year for the taste, two years for the aroma and three years for the colour. After that, you get a very good shoyu, very thick!" he explains.

The ingredients are simple: wheat and soybeans from Nagano, and Okinawa salt.

The wheat is roasted, the soybeans are steamed. They are bathed in spring water and aged for a long time.

Three years later, the nectar is manually filtered, a rare skill that is much-respected.

"Before, I thought exporting was only for big companies, but times have changed," says Jouzouten Ookubo CEO, Fumiyasu Ookubo.

Discover the art of the surimi masters in Odawara

In Japan, Miso is known as 'food for the soul'

Sake and Seafood, the perfect combination