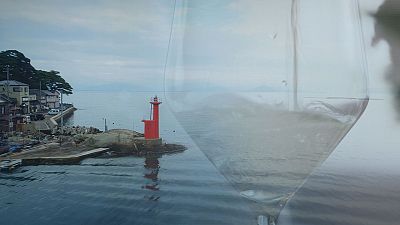 Japan’s iconic drink, sake, is still little known outside the country. But that could be about to change.

European restaurateurs are discovering the subtle, distinctive flavours that are the result of centuries of tradition and expertise.

In Japan, sake has long been known as the perfect accompaniment to seafood, bringing out the so-called fifth taste, Umami, the flavour so dear to the Japanese, which means "delicious" and "tasty".

That should come as no surprise. Japan is surrounded by water and famous for its seafood.

The sea also brings a constant humidity that is favourable to the cultivation of rice.

The short grain Yamada Nishiki is grown especially for sake. It’s in demand by brewers for its ability to absorb water and dissolve easily.

And it's the water, which makes up 80 per cent of the sake, which gives it its final quality.

Shinto shrines celebrate this miracle of nature. The Gokusui spring in Kyoto's Fushimi district is known to be one of the purest in Japan.

Sake factories have been here for centuries to harvest the best water.

Gekkeikan is one of Fushimi’s most celebrated breweries, with 370 years of experience. It has a spring that rises in the very heart of the brewery.

Sake is a fermented drink, such as wine or beer, and is between 14 and 18 per cent alcohol.

The rice is cooked, washed, spread, seeded with Koji, an enzyme that changes the starch into sugar, then the sugars into alcohol.

"In the water here, minerals such as calcium and magnesium are in perfect balance,” says Aikawa. “These minerals have a big role in the work of added koji, yeast. This gives sake its distinctive characteristic."

Tokyo restaurateur Dominique Bouchet holds two Michelin stars, and has lived between France and Japan for 35 years. For him, sake was a revelation.

"I compare sake as a bit like a diamond that combines with all the elements that give us the sea, whether it's crustaceans, shells, scallops, lobster, fish, etc. even the seaweed, so everything that comes from the sea goes very well, and I think that's what makes it beautiful, charming and magical for cooks."

The secrets of shoyu, the one thing you find on every table in Japan