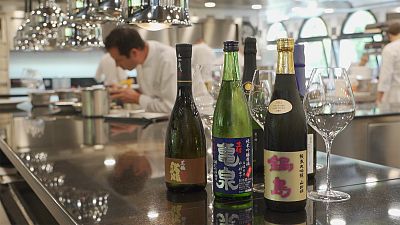 Japanese Sake is becoming more and more popular in Europe among chefs who are attracted by the drink's compatibility with seafood and several other dishes.

Gautier Roussille is a winemaker and agronomist based in France's famous Burgundy wine growing region. He is also one of the world’s Sake specialists and author of the reference book 'Nihonshu: Japanese sake'.

He believes this rice wine popular in Japan contains a number of unique elements.

"What determines the characteristics of sake is its raw material - rice," he explains. "In the right conditions, a fruit ferments naturally and gives us wine. But this is not the case with cereals which makes Japanese sake a creation of pure human genius."

Humans experience flavours on five main criteria these include umami, sweet, salty, bitter and acidic. Umami is the element that makes a dish flavoursome - it is the tomato sauce that’s cooked for a long time. As sake is naturally rich in umami and sweet it is naturally perceived as pleasant.

Does sake complement some food in particular?”

“Absolutely, especially with dishes that are difficult to pair with other drinks, such as asparagus, eggs or seafood," says Mr Roussille. "It's been proven that iron is the main element which, when combined with seafood, creates an unpleasant ocean-like aroma. But sake is very low in iron, so it fits perfectly with all types of seafood.”

Sylvain Huet is a sake expert who lives in Champagne, another of France's famous wine region. He is the organiser of The European Sake Show - the biggest-ever event dedicated to sake outside Japan.

So are chefs and cooks in Europe becoming more and more interested in sake?"

"It's important to know that sake naturally complements Japanese gastronomy from where it originated," he explains. "But all Western cuisine can feel the benefit, whether it’s French or Italian. From ' bistronomic' cuisine to the cuisine of three-star restaurants, sake not only complements wine, but can allow a real re-reading of certain dishes whether they are classic or new."

L'Assiette Champenoise's Chef Arnaud Lallement, who has three Michelin stars, is one of a new breed of chef who likes to combine seafood and sake.

He often suggests a glass of sake to go with some of his dishes which include elements like Brown Crab from Brittany. He was particularly excited to find there is even a 'sparkling' example of sake.

He explains how this Japanese wine can enhance a simple seafood dish.

Don't just listen to the chefs. Why not try it yourself?