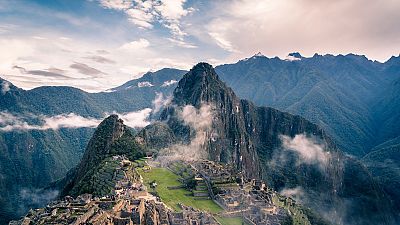 Memories of New Year's resolutions are long distant, whether you’ve stuck to them or not. And after a record number of participants taking part in this year's Veganuary pledge to ditch meat and dairy for a month, there's a new generation of plant-based eaters sticking to the diet throughout the year.

And with the huge rise in popularity vegan diets more people than ever are keen to continue their vegan food habit while they travel.

Since going vegan two years ago, I’ve been reluctant to travel as much as I did previously, which as a travel writer is not great for business. I've had to turn down trips to meat-heavy destinations, knowing I’d end up be living on a revolting - but vegan - diet of Oreos and potatoes.

Read more | Will the Duke and Duchess of Sussex be raising a vegan baby?

Earlier this year, I took the plunge with on a magical trip to India. The vegan options were spectacular, reigniting my wanderlust and setting me on a quest to find the best options for plant-based explorers. Because even vegans need a holiday!

To help you pick your perfect vegan travel destination for 2019, we’ve rounded up five of the best and most exciting spots around the world.

The most vegan-friendly city in the world

Although a meat-loving country, Germany’s capital Berlin has long been hailed as particularly good for vegans on the hunt for delicious cuisine.

Along with its incredible history and fascinating architecture Berlin offers around 600 vegan and vegetarian restaurants so it’s not surprising Happy Cow voted it the most vegan-friendly city in the world last year.

In fact, there is so much choice you might feel like you simply cannot pick one place. Luckily, you don’t have to as online eco city guide GreenMeBerlin offers a Foodie Vegan Tour of the city taking you to “30+ yummy plant-based restaurants, vegan shoe stores and vegan cheese workshops.”

Another hidden gem, Israel’s Tel Aviv has cropped up again and again as an unexpected vegan hot-spot, home to 200,000 vegans, the highest percentage in the world. And, unlike some of the other spots on our list is far more likely to give you a suntan!

Why? Middle-eastern food is typically filled with 'accidentally vegan' treats such as my childhood favourite Halwa (sweet sesame nougat) right through to the juicy falafel and velvety houmous you can gorge on at the Mahana Yehuda food market in Jerusalem.

And there are also chefs innovating fusions from cuisines like Ethiopian and Persian cuisines too so your tastebuds will be satisfied.

Impressive eco-resorts for the discerning vegan

The Hurawalhi adults-only resort is located in the north of the pristine Lhaviyani Atoll. The resort describes themselves as, “slice of tropical paradise can be reached during daylight hours by a scenic seaplane ride from the airport.”

Even better, the resort has just launched the Junk Food Kitchen; a vegan-orientated restaurant concept offering a delicious taster menu within a jaw-dropping under-sea restaurant. So you really can dine with the fish.

A surprisingly varied and exciting array of meat-free treats

For a more active holiday, head to Peru to trek the ever-sensational Machu Picchu, rewarding yourself with a surprisingly varied and exciting array of vegan treats when you finish.

The South American gem has a whole host of vegan eateries to fuel holidaymakers post trek and beyond, one of the most popular being Green Point vegan restaurant serving everything from gnocchi, to burritos to sushi.

Heading out of Cusco into Lima you can expect just as many excellent vegan options including the amazing ChocoMuseo where you can gorge on the totally dairy-free sweet stuff to your heart's content.

At the forefront of the plant-based movement

Another UK city hoping to be at the forefront of the vegan movement, Bristol has a plethora of plant-based eateries to choose from. In fact, it’s little wonder it was classed as, “The new European and world-wide vegan capital’ in this 2018 survey.

From delicious vegan mezze bars in the city centre to top-quality vegan pie and mash – a British classic – Bristol has your plant-based desires covered.

And don’t forget the reason you travelled there in the first place; history, culture and the coolest art scene around; Bristol’s the home of Banksy, hosts festivals (including the ever popular balloon festival) all-year-round and has a beautiful maritime history to keep even the fussiest traveller entertained.

For more information and events happening in Bristol check out the Visit Bristol website.