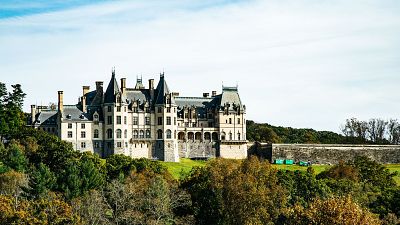 French singer-songwriter Laetitia Sheriff is travelling around the US on the trail of music, history and culture. For the next leg of her journey, she visited the “Land of the Sky”, Asheville, North Carolina.

Asheville gets its nickname from its spectacular location, ringed as it is by the Blue Ridge and Great Smoky Mountains, with their heavenward ambitions.

“Nature is everywhere here,” describes Laetitia. “You can see the Blue Ridge Mountains from pretty much everywhere in the city. There’s something about the light here. People had talked to me about the chemistry between the sun and the forest trees that gives that blue colour. But you have to see it to believe it!”

A city with an artistic soul

The city’s natural setting means there is no shortage of activities for the outdoorsy types but those with more cultural interests will also find themselves spoiled by Asheville’s vibrant arts scene.

The city owes its artistic credentials to George Vanderbilt. This Staten Island, New York, native took a fancy to the place and, in 1888, began construction of a country home. The resulting 8,000-acre Biltmore Estate required an entire army of artists and craftsmen to complete, and many of them decided to settle in the area, giving root to the artsy community that lives there today.

"I’ve rarely felt this in recent years,” added Laetitia. “The mentality of the people in this city has made me so happy and optimistic. Here, coming together is essential and expressing yourself by making art, even more so.”

Asheville claims to have more breweries per capita than any other American city, and first achieved Examiner.com’s "Beer City" title back in 2009, gaining it a reputation for being a hub for great craft beer.

Visitors can enjoy several annual beer festivals, as well as many different brewery tours—some 100 different locally-brewed beers are on offer around the city. Other local specialities also include beer-infused sweets, treats and… cosmetics!

It will come as no surprise then, that when it comes to picking a pint, visitors to the area are spoilt for choice. One place Laetitia recommends after visiting during her trip was Wedge Breweries: everything you drink there is brewed there, and you will not find it anywhere else.

Not to be missed: a roundup of our favourite Asheville destinations

Whether you’re a music fan, adrenalin junkie or literature nerd, we’ve got you covered with a selection of the top spots in and around Asheville, North Carolina:

1. The immense Biltmore Estate is home to the largest privately-owned house in the US. Built by George Washington Vanderbilt as a "little mountain escape", the 16,622 square metres of Biltmore House are a prominent example of the architecture of the American "Gilded Age”. “It’s crazy,” describes Laetitia. “It’s an unbelievable project that Vanderbilt has left America. A relic just as impressive as the Palace of Versailles.”

2. The Orange Peel Social Aid & Pleasure Club, known as "The Orange Peel" is a music venue known for giving the stage to up-and-coming bands as well as to legendary performers. Bob Dylan, Lauren Hill, Hootie & the Blowfish, and the Beastie Boys have all appeared there since it opened in 2002. For Laetitia, seeing the Oh Sees there was a highlight: “It gave me a lot of joy and emotion… the ‘rock’ crowd was the best I’d met.”

3. Chimney Rock is the centrepiece of Chimney Rock State Park and located about an hour south from Asheville city. It is by far the oldest attraction on our list, having sat there for 535 million years. Visitors can hike to the 96-metre high granite outcrop to experience views extending for 120 kilometres. The more intrepid amongst you can scale its unforgiving face: not a feat for the faint-hearted.

4. Thomas Wolfe (1900 - 1938) is a giant of American literature and possibly Asheville’s most famous son. Visitors to the city can tread in his footsteps, visiting his childhood home, his mother’s “Old Kentucky” boarding house and the playhouse behind it. His readers will doubtless recognise many of the landmarks that litter his autobiographical writings.

5. There are many places to zipline around the world but at Navitat the experience is taken to the next level. Thrillseekers can fly through the treeline at jaw-dropping speeds surrounded by the beauty of the Blue Ridge Mountains. “Jumping the zipline is a bit like this Notes from the USA adventure,” says Laetitia. “I only had one thought in mind: do it all again.”

Check out this locally inspired soundtrack to accompany you on your visit to Asheville, North Carolina: