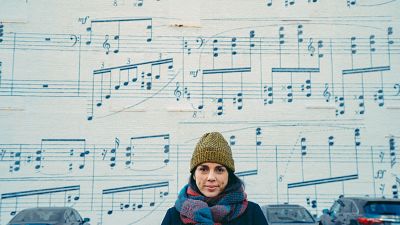 Notes from the USA took French singer-songwriter Laetitia Shériff on a tour of the United States to discover the country’s hidden musical heritage.

Born in Lille, Shériff began her musical career in 2004, when she released her first album Codification. This was followed by Games Over (2007) and Pandemonium, Solace And Stars (2014).

Throughout her career, the musician has collaborated with a diverse range of artists, across all genres – from legendary jazz saxophonist François Jeanneau to provocative punk diva Lydia Lunch and electronic producer Robert le Magnifique.

Along the way she has forged her own reputation, as a reference point for independent French women's rock, displaying influences from Neil Young to Nick Cave.

**How would you describe your music to someone who's never heard it? **

My music is between poetic minimalism and more electric moments, but let's say that what I like to do is rock.

**How and when did you know you wanted to be a musician? **

I was far too shy initially to consider a career as a musician, but when I realised that it could relieve all my teenage problems, I kept going until I found I felt great pleasure in playing for myself – and especially for the others. I can’t imagine myself doing anything else.

**Who has been your biggest source of inspiration? **

Music in all its forms, but especially those who have created and taken risks while remaining open, sincere, humble, generous and tolerant. The list of people is too long to mention them all.

What do you wish to accomplish with your music?

To meet and have an exchange with people and create the common thread of my existence, trying to worry as little as possible about my own death.

**Favourite thing to do when you're not playing music? **

Spend time with my family and friends but also write, read, take a walk, photography, go to exhibitions and concerts.

**What's the biggest misconception about the life of a musician? **

You can disconnect from everyday life when you're on stage or on tour, but that doesn't mean you don't care.

**What is the most difficult thing about writing a song? **

I love writing songs and it's not painful for me. This is the only area where I can let myself go because I know that nothing bad will happen to me. Which is a real relief.

**What is the most recent song you have written and what is it about? **

I wrote a song called "Time waits for no one but us" for a play that pays tribute to philosopher and poet Henry David Thoreau. This song is an ode to future generations, to nature and life.

You can watch the clip here.

**If you could collaborate with any musician, living or dead, who would it be? **

**Which song do you wish you had written? **

Love calls you by your name – Leonard Cohen

Free will and testament – Robert Wyatt

Where is my mind? – Pixies

Fade into you – Mazzy Star

I talk to the wind – King Crimson

**What was the highlight of your Notes from the USA trip? **

It was in Asheville at the national park. I’m not going to forget the crazy zip lines any time soon – a height of 100m and a speed of 90 km/h.

**What most surprised you during your trip? **

The almost automatic kindness of the people I met.

**What other US city would you most like to visit and why? **

Chicago because it is the third largest city in the USA and I like what happens musically there.

**What was your favourite meal in your Notes from the USA trip? **

The lobster roll and the Boston pizza of course!

If there was a second season of Notes from… which country would you want to visit?

If we’re talking about other cities in the US: Memphis, New Orleans, Atlanta, Chicago, Washington, Detroit, Portland, Austin, Phoenix