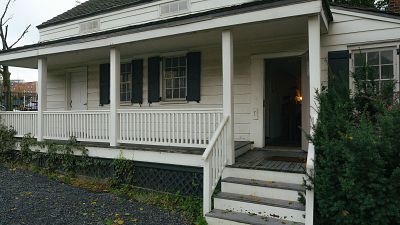 The Edgar Allan Poe Cottage, located in the Fordham neighbourhood of the Bronx, is the humble abode in which the world-famous American writer Edgar Allan Poe spent the last years of his life. It’s a must-see on literature lovers’ itineraries when they visit New York and was one of the stops on French musician Laetitia Shériff’s trip to the Bronx as part of the series Notes from the USA.

A haven in difficult times

In 1846, after living in Boston, Richmond, Baltimore and New York, Edgar Allan Poe decided to spend some time in the northernmost of New York’s five boroughs. This decision was motivated by the fact that Virginia Clemm, the writer's young wife, had recently contracted tuberculosis.

“People use to think that if you brought somebody of the country, the clean country air would clean your lungs”, explains Matt Mercier, writer and former caretaker of the house. “The Bronx was very different then. It was all country.”

From 1846, the small white house, originally built in 1812 by a farmer, was the home of the writer, his wife and his mother in law. But the family did not live there together there for very long: in 1847, his wife Virginia lost the battle against tuberculosis at the young age of 25.

As is the case with many artists, Poe's work was really valued after his death. During his life, the writer went through difficult times due to lack of money. However, despite the extreme poverty, the Poe family seemed to enjoy their small and simple home, for which they only paid $100 in rent per year.

“They were so poor they tell stories that they use to chop up dandelions for food and eat it”, tells Matt.

“If you wanted to be a writer in the 19th century in America, you needed a benefactor. Poe didn’t have a lot of friends, he had a lot of enemies”.

The cottage was also the place where Poe wrote some of his best-known poems. In Annabel Lee (1849), the narrator falls deeply in love with a beautiful woman, who he continues to love even after her death. The Bells (1849) was also composed there during Poe’s final years. The interpretations of the poem vary, but for many critics, it is a reference to the pain experienced throughout his life.

“Love and death were his two major obsessions”, Matt Mercier explains, adding that it was the tragedy of Virginia's death that enabled Poe to become “the icon that everybody remembers”.

The home of a ‘sad soul’

Many have described Poe's personality as special, turbulent and complicated. For writer Matt, these character traits are due to his difficult existence.

“He lived a very desperate life”, he claims. “Probably he was just a sad soul, trying to do the best he could”.

“People love the idea of Poe. We focus on the dark stories. He has written tones of pieces and some of them are very light, funny. He had a great sense of humour”.

Edgar Allan Poe lived in the cottage until the end of his life. He died in 1849, after being found delirious in the streets of Baltimore, Maryland. The circumstances of his death are still being discussed and remain a mystery for many.