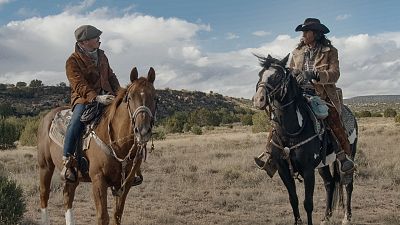 Most of the stops on acclaimed Northern-Irish singer-songwriter Foy Vance's whistlestop US road trip were places he'd played in before. When he rolled into Santa Fe, it was his first time in the New Mexican city. And he was smitten.

In Santa Fe, Foy starred in his very own Western. Accompanied by local stuntman, Adam Joaquin Gonzalez, he rode off - not quite into the sunset, but at least into the desert. At the head of the trail, sat on a horse, gazing back down at the vast landscape: "It was like looking back in time. We didn't have any phones on us. I just kept waiting for the tumbleweed to whistle past," he says.

The ride was, for Foy, "the beating heart" of his entire trip. "I wasn't too nervous about the horse," he said: "I grew up riding a horse called Sultan the proper Irish way: without a saddle and clinging on to the mane. I'd ride him up and down the street. But this was something else. I felt the lure of the cowboy life".

Eventually, Foy had to head back off the trail, but he was equally as taken with the city as he had been by the desert landscape.

Santa Fe, New Mexico is one of the oldest cities in the United States and stands at 2,134 metres above sea level. It is a peaceful meeting point for a variety of cultures: Mexican, American Indian and white American populations all call the city home and have all left their traces on the city's architecture and culture. "It's like walking into a spaghetti western," says Foy, "but at the same time, Santa Fe is a little pueblo. It's a beautiful mix".

Not to be missed: a roundup of our favourite Santa Fe, New Mexico destinations

While Foy admired Santa Fe from the wilds of the surrounding desert landscape, there’s plenty to do in town, too.

1. Santa Fe is a meeting point for American Indians, Spanish and English-speaking cultures, and nowhere is this better encapsulated than at the Museum of International Folk Art which houses the largest collection of international folk art in the world. Founder Florence Dibell Bartlett (1881-1954) believed that traditional folk art was a means to demonstrate the common bond between peoples. This remains at the heart of the museum's mission to this day.

2.Meow Wolf is, according to Foy, "hard to describe: a little museum that is all fluorescent, with loads of mad exhibits. I ended up crawling through a tube". Created by an interdisciplinary collective of nearly 200 artists, Meow Wolf creates immersive, interactive experiences to enable visitors to explore and experience stories. It challenges norms and champions weirdness and is a destination quite unlike any other.

3. Art-lovers can eschew museums entirely if they want to and simply wander through the Canyon Road art district, which has over a hundred galleries, shops and restaurants in just a kilometre of colourful adobe architecture. Visitors can experience art as it is being created, as painters and sculptors have studios along the entire length of the street. Or they can simply kick back and eat whilst they soak up the lively atmosphere.

4. Try some New Mexican fare. Founded in 1948, The Pantry has been feeding locals comfort food for 70 years. Breakfast is unmissable, whether you prefer sweet (blue corn cinnamon cakes) or spicy (buenos días). Or you could go to The Shed, where Foy tasted "the best margarita in the world: even at 9 in the morning it was delicious".

5. If you're thinking ball gowns and penguin suits, think again: Santa Fe Opera-goers can wear jeans (this is the Wild West, after all). Founded by New York-based conductor John Crosby in 1956, each of the three theatres in the opera house faces west, giving audiences an ever-changing backdrop of sunsets and thunderstorms. There is even a tradition of ‘tailgate dining’, which sees concert-goers come together for a picnic in the car park before they a leading up to the event.

• "Santa Fe" by Ottmar Liebert (1990) is one of the tracks on his album Nouveau Flamenco, fusing pop music and traditional flamenco forms. Liebert has lived in the New Mexican capital since 1986.

• By the time country-musician, Eliza Gilkyson released "Lights of Santa Fe" (2007), she had long since moved to Texas, but the song evokes her feelings for her first adult home in New Mexico back in the 1960s.

• King Hummus and MC Tahina are the humorous duo that make up Santa-Fe based band, the Gluey Brothers. Try "Pinon Lurker" (1998) from their Luncheon Meat of the Giants album.

• The first commercial recording of the pioneering Santa Fe Opera was of Virgil Thomson and Gertrude Stein's The Mother of Us All (1976), conducted by Raymond Leppard.

Getting to know singer-songwriter Foy Vance