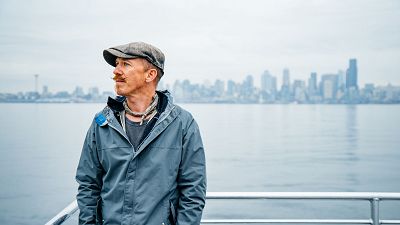 Notes from the USA travelled with northern-Irish singer-songwriter Foy Vance to discover the country through some of its musical gems.

Vance’s connection with America goes way back, as his own music is rooted in the rich musical history and aesthetic of the Southern United States.

How would you describe your music to someone who's never heard it?

It’s not really about genre or style. It’s about songs.

When/How did you know you wanted to be a musician?

All I’ve ever known is a deep love of music. I gave no thought to what that meant until I was in a band and had been gigging for a couple of years, then it dawned on me that all I did was play, make or think about music. You could say I realised I wanted to be a musician when I already was one.

Who has been your biggest source of inspiration?

It’s not 'who' as much as ‘what’. The world around us is wonderfully rich with mystery. To me that is immeasurably more inspiring than all the music ever created.

What do you wish to accomplish with your music?

Favourite thing to do when you're not playing music?

What's the biggest misconception about the life of a musician?

That it doesn’t involve hard work. Without a good work ethic, even the most naturally gifted musicians wouldn’t see it through for long.

What is the most difficult thing about writing a song?

Capturing the feeling beyond the composite parts.

What is the most recent song you have written and what is it about?

It’s called "Cradled in Arms." It touches on the birthdays of me, my Mum, my Dad and my kids. As to what it is actually about, I’m not sure.

If you could collaborate with any musician, living or dead, who would it be?

Which song do you wish you had written?

It would be one from a list of many. For the sake of this, I’ll say ‘A Case Of You’ by Joni Mitchell.

What was the highlight of your Notes from the USA trip?

Riding a horse up a Rocky Mountain in Santa Fe.

What most surprised you during your trip?

The Rock ’N' Roll Hall of Fame. I didn’t expect to be as impacted by it as I was.

What other US city would you most like to visit and why?

Honolulu. Because it’s in Hawaii and I’ve never been.

What was your favourite meal in your Notes from the USA trip?

Huevos Rancheros washed down with one of the best Margaritas I’ve ever had, from ‘The Shed’ in Santa Fe.

If there was a second season of Notes from… which country would you want to visit?