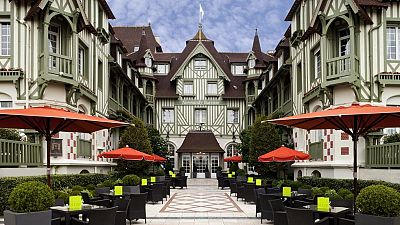 This is where Parisians come to unwind after a stressful week, indulge in freshly-caught seafood and breathe some less-polluted sea breeze for a few hours. New Yorkers go to the Hamptons, Londoners have Hastings, and Parisians slip away to Deauville; a classy and timeless seaside resort town located 200 km to the West on the coast of the English Channel.

Host of the yearly American Film Festival since 1975, Deauvilles’ close ties with Hollywood are somewhat... quirky. Every Autumn, its 3000 inhabitants see international celebrities flocking from all over the world to attend the event. The Festival makes it a particularly interesting time to schedule a visit, but the experience would be very far from the regular, peaceful ambiance.

Where do these A-listers stay, you wonder. Well, there are only two places they can enjoy a luxury accommodation experience: Le Normandy, and nearby, **Le Royal Hote**l. The two institutions belong to the Barrière Group, a renowned family entertainment company that owns and operates casinos, restaurants, golf courses, luxury spas and hotels in France, Switzerland and Africa.

Rooms at Le Normandy pay homage to classic movies highlighting the involvement of the Barrière family in the Festival, of which they are financial benefactors. The ‘A Man and a Woman’ suite is dedicated to Claude Lelouch's masterpiece of the same name, a cult French film starring Anouk Aimée and Jean-Louis Trintignant, that won the 1966 Palme d'Or in Cannes.

The suite features black and white ‘Toile de Jouy’ wallpaper, which is a reproduction of the period "Délice des 4 Saisons" pattern, with matching pillows, and a cosy 30m² lounge bathed in sunlight. Of the 271 rooms and suites in the hotel, this one caught our eye for the charming background story, laid back atmosphere and unique interior decor.

Deauville by day… and by night

Unpack and cross the road behind Le Normandy to reach the beach where multiple references to cinema dot the sidewalk. Bette Davis, Jack Nicholson, Rita Hayworth,... Each of the 450 sea-facing cabins on the boardwalk bear the name of a celebrity that attended the Deauville American Film Festival. Test your knowledge in classic movies by remembering in which masterpieces these names starred whilst strolling along Les Planches, the most coveted promenade in Normandy.

Take a break at one of the two bars or the restaurant - Bar de la Mer, Bar du Soleil, Le Ciro's -, owned by the Barrière group. This is when you’ll realise that most of the entertainment facilities in town are actually Barrière-owned. Our favourite was the Bar du Soleil and the 600m² sunny terrace where people stop to see and be seen, whilst catching up on their tan and sampling some Mediterranean-inspired tapas in one of the rocking chair sun loungers.

Your Deauville experience wouldn’t be complete without a golf session. The Golf Barrière Saint-Julien in nearby Touques Valley caters for everyone from introductory classes designed for beginners to an ambitious nine-hole course. We recommend having lunch on the premises as the restaurant has a very chic private country club feel and dramatic views over green large fairways.

End your day by paying a visit to Casino Barrière Deauville - even if just for the sake of #interiordecor Instagramming. Imagined by Jacques Garcia in a building dating back to 1912, the casino is in the baroque style and decorated with crystal chandeliers, gilding, marble, velvet and palatial-like moldings, under a 20-meter-high ceiling. Because less is more.

Savour regional classics at La Belle Epoque restaurant located in the Norman Courtyard. For those on a wellbeing quest, the restaurant offers a special Wellness menu by Chef Mikaël Amisse in partnership with the hotel’s spa. The 3-course meal includes a butternut and hazelnut velouté, scallops on porcini cream and melted leeks, and... a chocolate mousse. Yes, the whole thing is under 500 calories.

Speaking of wellness, the Spa Diane Barrière Deauville, opened in 2016, is the latest addition to Le Normandy. It boasts six massage booths including two reserved for couples, a magical heated interior pool under a translucent glass roof, sauna and hammam. In a pristine white - almost clinical - environment, therapists developed a series of treatments inspired by age-old Chinese medicine and coupled them with modern techniques.

Their massages aim at stimulating acupressure points throughout the entire body without the use of acupuncture needles. And it works. You can even round off with a yoga, meditation or pilates class, held inside the super sleek ‘Le Tigre Yoga Club’ studio or on the beach (in August only), for a holistic experience. A great conclusion to a relaxing seaside weekend.

Superior room at Le Normandy from €233 per night.