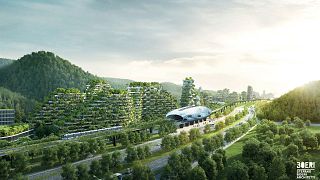 In order to combat climate change and pollution and to reduce the average temperature, improve local air quality and extend regional biodiversity, the construction of the world's first forest city has been officially started in Guangxi Province in Liuzhou, southern China.

The Forest City project was presented for the first time at the COP 21 international conference in Paris in 2015.

The architecture and design have been provided by Stefano Boeri Architetti. The company's commitment on urban forestry has become even more widely known after the success of their work on Bosco Verticale (Vertical Forest), the pair of residential towers in the Porta Nuova area of Milan.

This time they have been asked to design an entire city covered with plants, where energy self-sufficiency can be achieved while air pollution can be reduced, such issues being highly critical for present-day China.

If the project meets expectations, it will be the first of many green cities. The project would also have immediate effects in China, as they are the world's largest carbon dioxide emitter and as such are under international pressure to decrease that.

Click on the video above to learn more about the Liuzhou Forest City.