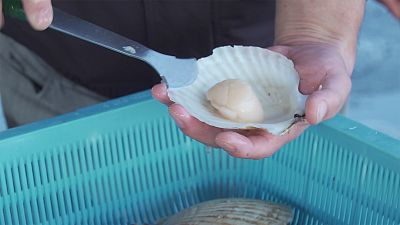 Taste, euronews' culinary magazine continues its investigation of the best of Japan, savouring its exceptional gastronomy. In this edition we are visiting the island of Hokkaido to see what they do with scallops, and how French Michelin-starred chef Thierry Voisin uses them.

Watching the ships landing their catches of tonnes of scallops is impressive enough. Seeing the product close up is even more so.

Between 10 and 40 tonnes of scallops are taken each day from the waters north-east of Hokkaido between June and November. It is one of Japan's richest fishing areas. Chef Thierry Voisin has rarely seen such prime examples.

"Do they taste very different to European scallops?"

"The taste is different, but the paradox, which is pretty incredible in all these high-quality products, , is that the gentleness, the acidity, the balance and the texture are the same, firm yet melting at the same time."

"Mr. Neda, you are a wholesaler here on Hokkaido, and it's said the scallops here are the best in Japan. Why?"

"Hokkaido scallops are very natural, and especially fleshy. They are high in proteins, so very good. I think they're the best in the world!" says marine products wholesaler Toshiaki Neda.

Mr. Neda is rightfully proud of his factory, from where he exports his scallops to the rest of the world.

The scallops are shelled and then rinsed in seawater. Part of the production is frozen for export. Mr. Nada's factory is the first on Hokkaido island to get the certification needed to export to the EU. But his scallops go elsewhere in the world, too.

"Hokkaido's waters produce 500,000 tonnes of scallops every year. We get a lot of orders from Europe, but also from America and South-East Asia, because they like the top quality we offer," he says.

Tokyo awaits, and our latest recipe from Chef Thierry Voisin.

"So here we have our Hokkaido scallops, and what fine examples they are. Look at that! That's what I call a scallop," he beams.

Chef Voisin is going to prepare classic pan-fried Coquilles St. Jacques, with a sweet potato puree. There's an orange zest emulsion, and an apple and onion jam with a touch of saffron.

"It'll be a little like a jam, the apples, onions and saffron. Ten minutes to cook, and it's magnificent. After that you cook the scallops.

Plating up, we have the sweet potato, the glaze, we place the jam mixture on our coquilles St. Jacques, and look at that? Doesn't that look delicious, Sophie?

Then the scallops can just sit on there, like that. A few flowers, and leaves scattered by the wind. All you have to do now is taste it," says Voisin, ever the artistic chef.

"It's delicious, chef, Thank you, and thank you for your recipe that you can see again on euronews.com. See you for the next episode of Taste from Japan."