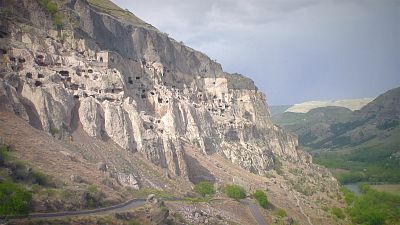 It is called the cave town.

Vardzia is a spectacular site in southern Georgia, dug out of the Erusheti Mountain in 1185.

It had special significance for Georgians because it was associated with King Tamar - such a charismatic woman that she was crowned King instead of Queen!

"Among all the architectural jewels of Georgia, the Vardzia complex is the most precious," said 'Postcards' reporter Claudio Rosmino.

"In this city, carved into the rock, there were houses, shops, libraries and even a water network. In total, 6,000 rooms, spread out over 13 levels"

In 1283, just a century after its construction, a devastating earthquake destroyed a huge part of the site. What we see today is less than a third of its original size.

"But later it became a Royal monastery with educational functions"

A small group of monks is still living there. Some 300 apartments can be visited and in some tunnels the old irrigation pipes still bring drinkable water.