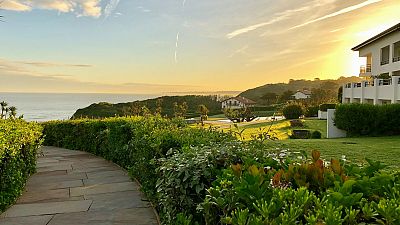 It was hard to believe we were only a few miles from the Spanish border.

Then again, it was pretty hard to believe we were in France, too. Such is the nature of the Basque region, straddling the South West of France and North West of Spain. The culture is of its own, from the clothes to the cuisine, and, importantly, the language.

Spain’s General Franco banned Euskara (Basque) during his time in power from 1939-1975, such was his fear of the Basque sense of independence; non-Castilian (non-Spanish) names were also banned for newborns. Secret lessons were run in church basements and private homes for decades until the transition to democracy began in the ‘70s. An estimated 35 percent of the population in the region now speaks Basque, having saved it, and a large part of the area’s identity, from near extinction.

The Iparralde (literally “the northern part”), is located on the French side of the border. Here, there is certainly more of a sense of ‘French-ness’, in the coastal towns of Biarritz and Saint-Jean-de-Luz. However, Basque pervades every café, every delicatessen, every patisserie. The road signs are in French and Basque. The houses show both French and Spanish influence, oak windowsills and terracotta roofs.

The Basque coast differs from other coastal destinations in France, such as the Côte d’Azur. Here, it seems more local, more attuned to the desires of those who live in, or near, the towns and cities. Saint-Jean-de-Luz, for instance, relies on huge tourism figures from northern Spain and the rest of southwestern France, and Biarritz, while attracting a certain type of international guest, is still conspicuous in its local feel.

Even the towns themselves have distinct characters. Biarritz is a glamour town. Known for its Casinos - most notably the Barrière and the Bellevue on the waterfront - the streets are flanked by luxury boutiques and grandiose buildings, most notably the Hôtel du Palais, built in 1855 for Empress Eugénie, wife of Napoleon III. Destroyed by fire in 1903, it was rebuilt to an even more opulent degree and became famous for its international clientele, such as the UK’s King Edward VII.

Biarritz, and the coast, in general, is also famous for its high-end surfing conditions. It’s here, allegedly, that surfing was first practised in Europe. The story goes that in 1957, German-American director Peter Viertel was filming in Biarritz with his wife, actress Deborah Kerr when a family friend visited from California. His use of a surfboard off the coast of the town is cited as the moment surfing was introduced to the continent, and before long, Biarritz was heralded as one of the most popular destinations for surfers. The popularity continues to this day, with surfers even braving the cold Atlantic water in early spring in order to find the perfect wave.

Lesser-known than its glamorous cousin, the port town of Saint-Jean-de-Luz is a favourite spot for those looking for calm waters and serene beaches, due to its strong sea walls protecting the bay from the worst of the Atlantic’s force. The town has enjoyed wealth for centuries due to successful fishing, but also a period when Basque pirates would raid and capture foreign ships off the coast - English sailors even went as far as calling Saint-Jean-de-Luz the ‘Viper’s Nest’.

The town is also renowned for its royal wedding connection. The undisputed highlight for any architecture enthusiast is the Église Saint-Jean-Baptiste de Saint-Jean-du-Doigt. Saint-Jean-du-Luz’s central church, it was here that Louis XIV, King of France and Navarre, married the Spanish Infanta Maria Theresa in 1660, thereby solidifying international relations and his claim to the Navarre throne. The outside, while physically imposing, is unadorned and unassuming. It’s when you enter the building that the splendour of 17th Century France greets you, with Romanesque stained glass and a remarkable Baroque altarpiece stretching almost from floor to ceiling.

For my time in the Basque region, I stayed at Saint-Jean-de-Luz’s La Réserve, a luxury complex of hotel and studio flats nestled on a cliff face overlooking the might of the Atlantic. Slightly distanced from the town, along the coast towards Biarritz, La Réserve manages to engender a sense of privacy and discretion while having an open-plan design centred around the hotel’s new infinity pool. La Réserve is owned by Groupe Floirat, along with Les Manoirs de Tourgeville in Normandy, and Hôtel Byblos in St Tropez. Each hotel is strikingly different; whereas Les Manoirs is a leafy, more family-centric destination, and Byblos is the archetype of Tropezian glamour, La Réserve makes the most of its stunning surroundings by cultivating an ambience of relaxed quality: the owners and staff know they have a first-class product. The air of ease and confidence can only serve to relax guests even more - as if that were necessary in the first place.

Dinner at La Réserve is an accomplished affair. I was treated to the ‘Dîner à 4 Mains’, a tasting menu devised by the house chef Fabrice Idiart and MOF (Meilleur Ouvrier de France) and officially world champion of frozen desserts, Thierry Bamas. Each of the seven courses mixed sweet, sour and savoury to create dishes almost impossible to label. Highlights included the ‘profiterole’ of local goats’ cheese, spring vegetable and broad bean foam, and the ‘Tarte au Citron’, a concoction of strawberries, fruits of the forest, citrus, coconut and buttery biscuit base, unlike any lemon tart I’ve ever seen or tasted.

The morning after the meal demanded some exercise, so I involved myself in one of the hotel’s fitness offerings, Bungy Pump. The oddly-titled sport was invented by the Swedes as a way to add weight resistance to walks and hikes. There are similarities to Nordic Walking - brisk marching through the countryside, improving oxygenated blood - but whereas the sticks in Nordic Walking are fixed, Bungy Pump derives its name from the elastic inside the sticks, which can be altered to provide various levels of resistance. What started out as a leisurely stroll soon turned into an intense training session. I was thankful for the slightly cooler weather saving any embarrassment, especially as my trainer, Fabien, was a former striker for French Ligue 1 football team Toulouse FC, and had obviously maintained peak physical fitness.

In between heavy breaths and beads of sweat, I managed to enjoy a final view of Saint-Jean-de-Luz, as we traversed the cliffs overlooking the town. It’s a mystery why this part of the coast isn’t busier, especially with foreign tourists. I suppose the locals don’t mind: sometimes it’s better to remain a gem undiscovered by the majority, rather than be cursed by your own natural beauty. I’m certainly glad I discovered it.