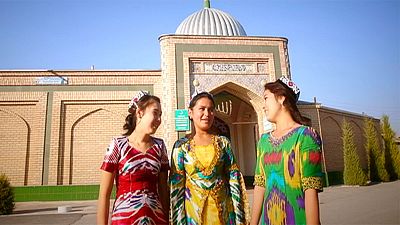 Our Postcard this week is from eastern Uzbekistan, where school children show off the silk made in the city of Margilan.

The technique used here in Margilan goes back more than 2,000 years

This was one of the most important stops on the ancient Silk Road, and the fabric made here is described as being among the best in Central Asia.

Euronews’ Seamus Kearney reported: “And when it comes to the actual making of the silk products here it’s not industrial machines but workshops where the tradition of working by hand is passed on through the generations.

Silkworm cocoons from mulberry trees are used here, with everything hand spun, and the individual threads are dyed before being weaved on traditional looms.

Mokhinur Siddiqova, a Margilan guide, told Postcards: “The technique used here in Margilan goes back more than 2,000 years, and this is the only place in Uzbekistan where the silk is hand-spun.”

It is easy to organise a visit to the factories famous for their silk products, especially the unique colourful scarves and clothing.