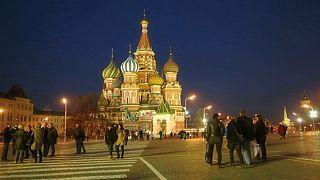 For anyone visiting Moscow, St Basil’s has to be near the top of the sightseeing list. Often mistaken for the nearby Kremlin, the cathedral was built on the orders of Ivan the Terrible.

Seen from outside in Red Square, St Basil’s is spectacular enough, but to appreciate the cathedral’s majestic splendour and antiquity you have to go inside to really step back in time.

St Basil’s, whose official name is actually much longer, is now a museum. With its labyrinth of exquisite religious artwork, it is hard to believe the cathedral was once threatened with demolition in Soviet times.

The scale of the cathedral also makes a big impression on visitors. Nadejda Malysheva, an expert on St Basil’s, showed euronews around one of its churches.

“This is the Church of the Entry into Jerusalem, just one of nine churches that make up the cathedral, each of which is very unique,” she explained.

Many say the the best view of the exterior of St Basil’s is often after dusk, when the towering, ornate domes are bathed in golden light.

Travel Diary: "St Basil's is a feast for the eyes!"