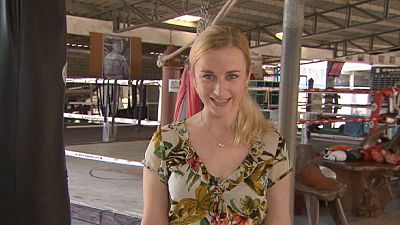 <p>I must admit that I didn’t know much about Muay Thai before finding out that I would film a report on this ancient martial art. The more I read about it, the more interested I became. The ‘art of the eight limbs’, as they call it here in Thailand, has a long history. <br />  <br /> Legend has it that since the 13th century, Muay Thai has helped protect the Asian kingdom’s independence. The use of fists, knees, elbows and feet are allowed. They all seem to fly around simultaneously with breathtaking speed. <br />  <br /> We started our journey in the Sityodthong camp, where I met the top master Kru Yodthong. It was an impressive encounter for me because he is one of the most popular Muay Thai masters in Thailand, with a charismatic personality to boot. He is 74-years-old, not that you’d know it. He showed us some moves and even at this age, his speed was impressive. He told me that it’s not power, but technique that counts. You can have a lot of muscle and strength but without the right technique, you won’t get anywhere. </p> <p><img src="https://static.euronews.com/articles/bonus/193004/PHOTO1-s.jpg" alt="" /><br /> <em>Statue of Kru Yodtong Senanan</em><br />  <br /> The adoration from his students is obvious. In the camp they call him ‘papa’. He is a true star and there were pictures of him with important people everywhere, including a meeting with the country’s king and queen.</p> <p><img src="https://static.euronews.com/articles/bonus/193004/PHOTO2-s.jpg" alt="" /><br /> <em>“The offical master of Muay Thai” shows us some moves</em><br />  <br /> The camp was out in the open. When we arrived it was boiling hot and I couldn’t imagine how the fighters trained in these temperatures. They rise daily at 6.00 am, before some running and training, and then they have lunch followed by several more hours training in the afternoon. </p> <p>During our visit, there were around 20 people training at the site, including foreigners from Japan, the Czech Republic, England, Germany, Spain and Italy. Some of them wanted to learn Muay Thai for fun, whilst others took it more seriously and were hoping to carve a future in the sport.<br />  <br /> <img src="https://static.euronews.com/articles/bonus/193004/PHOTO3-s.jpg" alt="" /><br /> <em>Cameraman Fabian Welther in action</em></p> <p>I was particularly impressed by a 15-year-old girl who was being trained by the son of the Master. She was a lot of fun, yet possessed so much power. The teacher told me that she’d already won many fights and that even boys her own age would struggle to beat her. The sport is becoming increasingly popular for women as well.</p> <p><img src="https://static.euronews.com/articles/bonus/193004/PHOTO4-s.jpg" alt="" /><br /> <em>With the big Master</em><br />  <br /> After the experience at the training camp, we were very keen to film at the Mecca of Muay Thai: The Lumpini Stadium – and we weren’t to be disappointed. <br />  <br /> One thing was immediately striking: the euphoria of the supporters. The excitement is overwhelming. We were lucky enough to film backstage and follow the preparations. The fighters are never alone; they have a team around them preparing them for the grand show. Special oils are rubbed into the body so that the fighter is more immune to the pain of the blows. </p> <p><img src="https://static.euronews.com/articles/bonus/193004/PHOTO5-s.jpg" alt="" /><br /> <em>Getting ready for the fight</em><br />  <br /> Before entering the ring, the master places the Mong Kon - a ceremonial rattan headband on their head. Despite the loud atmosphere, this is a very private moment between the fighter and his teacher.<br />  <br /> When the fighter gets into the ring, the Wai Kru dance begins, which pays tribute to his teacher. The fights are accompanied by four musicians who play all night. They adjust their tempo to the fights. It’s fascinating to see the entire spectacle unfolding and you shouldn’t miss it if you have the chance.  </p> <p><img src="https://static.euronews.com/articles/bonus/193004/PHOTO6-s.jpg" alt="" /><br /> <em>Fight at the legendary Lumpinee Stadium</em></p>