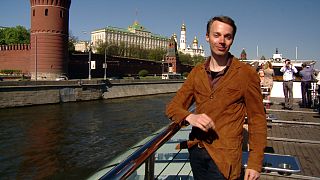 The final destination in our two-month long televised journey across Russia, Moscow remains the city all Russian roads lead to. The country’s political and economical centralization keeps fuelling Moscow’s booming growth, bringing thousands of people from surrounding regions and countries. Many see that as Moscow’s main problem: the 12-million megalopolis is falling victim to its own success, chronically paralyzed with infinite traffic jams, losing one vacant spot after the other to infill development and fighting uphill battle to solve the parking problem at the city center.

That’s one of the reasons why touring around the city on the subway or a boat may usually be more convenient than taking a car. The Metro stations, with their socialist realist decor, are themselves a touristic attraction; finding your way around, however, can be tricky: although all station names are transcribed in Latin letters on the maps, many of the stations have several exits or connection passages marked with signs in Russian only.

Just few years ago, the main problem for anyone visiting Moscow would be finding a comfortable and affordable room to stay: the offering was pretty much limited by either five-star luxury hotels at exorbitant prices, or Spartan conditions in decaying remains of Soviet times. Now there’s quite a choice of two- and three-star hotels, conveniently located in the city center. Getting there from the plane is now much faster and cheaper than taking a taxi with new express train lines connecting the airports to the metro.