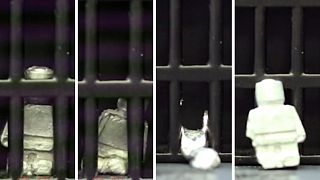 One of the great science-fiction movie villains was the T-1000 shape-shifting robot from Terminator 2.

The robot’s ability to shift between solid and liquid form meant it could get past almost any obstacle, including metal bars - and it made for some iconic and scary scenes.

Now scientists have created a mini version of the T-1000. While it looks more like a Lego figurine than a scary man-sized robot from the far-future, just like the T-1000 it can change to a liquid shape to move past obstacles.

Luckily, that’s where the similarities end for now. The robot is controlled with magnetic particles embedded in its material.

This gives it the ability to melt to liquid form and solidify again with heating and cooling, induced with an alternating magnetic field.

It also allows the team to control the robot’s movement in response to a given magnetic field.

Scientists hope the discovery could one day help across multiple fields, from medicine to assembly lines, where the material could for instance make it easier to solder and screw parts in places that are hard to reach.

Publishing their findings in the journal Matter, the researchers explained how they used the metal gallium, as it has a very low melting point of 29.8 °C.

By heating and cooling the robot, they were able to demonstrate how it can melt through the gaps in metal bars, before taking its shape once again.

“Giving robots the ability to switch between liquid and solid states endows them with more functionality,” said Chengfeng Pan, an engineer at The Chinese University of Hong Kong who led the study.

The idea was actually inspired by sea cucumbers and other animals found in nature, which can morph between stiff and flaccid states in order to either improve its load-bearing capacity, or prevent damage from the environment.

Traditional robots are hard-bodied and stiff, according to the researchers, while “soft” robots are flexible but weak.

The team was able to create a “magnetoactive solid-liquid phase transitional machine” - a phase-shifting robot that doesn’t rely on heat guns, electrical currents, or other external heat sources like existing phase-shifting materials.

A robot for hard-to-reach places

As well as slipping through the bars, the robot was also put through its paces as it jumped over moats, climbed walls, and even split in half to move other objects around before coming back together.

The team has demonstrated how the robots could remove a foreign object from a model stomach, and also how it could deliver drugs on-demand into the same stomach.

They also showed how the material could work as smart soldering robots for wireless circuit assembly and repair - by oozing into hard-to-reach circuits and acting as both solder and conductor.

Also, they could be used as a universal mechanical screw for assembling parts in places that are difficult to reach, by melting into the threaded screw socket and then solidifying.

“Future work should further explore how these robots could be used within a biomedical context,” says Majidi.

“What we're showing are just one-off demonstrations, proofs of concept, but much more study will be required to delve into how this could actually be used for drug delivery or for removing foreign objects”.

For more, watch the video in the media player above.