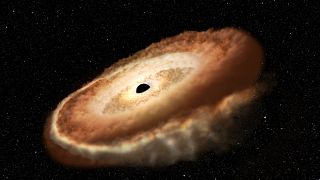 Astronomers have captured a star’s final moments as it is violently ripped apart and turned into a doughnut shape by a black hole.

Describing the findings as “right at the interface of the known and the unknown”, the experts behind the discovery said it is teaching them a lot about black holes.

Black holes are cosmic objects that are so dense not even light can escape their pull.

They cannot be directly observed with telescopes that detect x-rays, light, or other forms of electromagnetic radiation, but their presence can be detected by their effect on other matter, such as stars.

Despite many recent discoveries concerning black holes, there is still a lot we don’t know about their nature - but the recent discovery of a black hole whipping a star into a doughnut shape has shed some more light on them.

Called a “tidal disruption event”, the star is being pulled into the black hole while the black hole blows out radiation, captured by Hubble’s sensors which can pick up ultraviolet radiation.

There have been around 100 tidal disruption events around black holes detected by astronomers using various telescopes so far.

"However, there are still very few tidal events that are observed in ultraviolet light given the observing time. This is really unfortunate because there's a lot of information that you can get from the ultraviolet spectra," said Emily Engelthaler of the Center for Astrophysics at Harvard & Smithsonian (Cfa).

"We're excited because we can get these details about what the debris is doing. The tidal event can tell us a lot about a black hole."

Changes in the doomed star's condition are taking place over the course of days or months.

It’s estimated that this sort of stellar shredding happens only a few times every 100,000 years in most galaxies.

"Typically, these events are hard to observe. You get maybe a few observations at the beginning of the disruption when it's really bright. Our program is different in that it is designed to look at a few tidal events over a year to see what happens," said Peter Maksym of the CfA.

"We saw this early enough that we could observe it at these very intense black hole accretion stages. We saw the accretion rate drop as it turned to a trickle over time"

The data is interpreted as coming from a very bright, hot, doughnut-shaped area of gas that was once a star.

Known as a torus, this area is the size of our solar system and is swirling around a black hole in the middle.

"We're looking somewhere on the edge of that doughnut. We're seeing a stellar wind from the black hole sweeping over the surface that's being projected towards us at speeds of 20 million miles per hour (32 million km/h, or 3 per cent the speed of light)," said Maksym.

"We really are still getting our heads around the event. You shred the star and then it's got this material that's making its way into the black hole. And so you've got models where you think you know what is going on, and then you've got what you actually see. This is an exciting place for scientists to be: right at the interface of the known and the unknown."

The results were reported at the 241st meeting of the American Astronomical Society in Seattle, Washington.