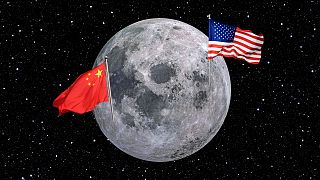 The world “better watch out” for the Chinese trying to dominate lunar resources, Nasa’s top official Bill Nelson has warned.

In an interview with POLITICO, NASA’s administrator said the US was in a new space race with China, and spoke of fears that Beijing could try “under the guise of scientific research” to dominate the most resource-rich locations of the Moon - and perhaps even keep other space agencies out.

“We better watch out that they don’t get to a place on the Moon under the guise of scientific research. And it is not beyond the realm of possibility that they say, ‘keep out, we’re here, this is our territory,” he said.

“If you doubt that, look at what they did with the Spratly Islands”.

In December, NASA celebrated its 26-day Artemis I mission, in which an uncrewed space capsule completed a tour around the Moon. The mission, which is the first big step in NASA’s plan to send men back to the lunar surface, was hailed “successful beyond NASA’s dreams.”

But NASA’s achievements are being clouded by China's “strategic goal of displacing the US as the dominant global space power economically, diplomatically and militarily,” as outlined in a report written by officials from the Space Force, the Defense Innovation Unit, the Air Force and the Air Force Research Laboratory.

“While the United States space industrial base remains on an upward trajectory, participants expressed concerns that the upward trajectory of the People's Republic of China…is even steeper, with a significant rate of overtake, requiring urgent action,” the report says.

“Proactive measures are required to sustain our nation’s space leadership across all instruments of national power despite China’s attempt to accelerate closing its technology gap with the US”.

China has made astronomical progress in the last 20 years, recently completing its new space station, Tiangong, and in November launching a crew of taikonauts (Chinese astronauts) to the station.

In December, China’s government presented its long-term vision for more ambitious space missions, such as building infrastructure in space and creating a space governance system.

As stated by the Outer Space Treaty reached at ONU’s General Assembly in 1966, nations or companies cannot actually claim sovereignty on the moon or make it their own territory.

This is determined by a patchwork space governance structure made up of international treaties, guidelines, national regulatory laws and industry best practices to guide decision-making mechanisms in times of doubt.

There is also a Moon agreement to regulate exploitation

The Moon Agreement reaffirms and elaborates on many of the provisions of the Outer Space Treaty as applied to the Moon and other celestial bodies.

Fundamentally, the Moon treaty says that the environments of places like the Moon or Mars, for instance, should not be disrupted. The Agreement also establishes that “an international regime should be established to govern the exploitation of such resources when such exploitation is about to become feasible”.

Since the Moon treaty was adopted by the UN’s General Assembly in 1979, it has been ratified by five countries, none of which had completed human spaceflights, such as the United States, Russia or China.

So, where does this leave with us with the current competition between the US and China?

The geopolitical battle will bring, at least, knowledge

And because the US “will not be very happy to see the Chinese send a crew to the Moon before them,” it will accelerate their efforts, he predicts.