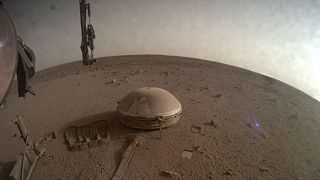 With its power running critically low, NASA’s InSight lander, which has been broadcasting data back to Earth from Mars since it landed in 2018, has sent a farewell message.

Because dust has been accumulating on the lander’s solar panels, it is unable to power up. The situation has been exacerbated by a dust storm in recent weeks, leading to a depletion in its batteries.

“My power’s really low, so this may be the last image I can send,” a message read on the lander’s Twitter account, which is run by the NASA Jet Propulsion Laboratory (JPL).

The tweet continued: “Don’t worry about me though: my time here has been both productive and serene. If I can keep talking to my mission team, I will – but I’ll be signing off here soon. Thanks for staying with me”.

The Jet Propulsion Laboratory said on December 18 that InSight was not responding to communications from Earth, which “may mean the end of operations for the spacecraft”.

It continued that the team would continue trying to contact InSight again.

InSight, which has been stationary since it landed on the Red Planet in November 2018, conducted studies on the deep interior of the planet.

It landed on Elysium Planitia, a plain on the equator, where it placed a seismometer to detect seismic activity and provide 3D models of the planet’s interior.

It also used a heat probe to study the early geological evolution of Mars.

JPL said InSight achieved its primary science goals within its first Martian year (which is around two Earth years), detecting more than 1,300 “marsquakes,” as well as multiple meteor impacts, and gaining insight into the planet’s interior makeup.

Two research papers published in the journal Science detailed meteorite strikes on the Martian surface detected by InSight in September and December of last year.

Seismic waves triggered by the impacts revealed fresh details about the structure of the Martian crust, the planet's outer layer.

One rock with an estimated diameter of 5-12 m crashed on Christmas Eve last year, carving a crater about 150 m wide and 21 m deep.

It caused a magnitude 4 quake detected by InSight's seismometer instrument, while cameras aboard the Mars Reconnaissance Orbiter observed the crater from space.

Boulder-sized blocks of ice were seen strewn around the crater's rim.

Objects that large enter Earth's atmosphere about once a year, but generally burn up in our planet's thicker atmosphere.

"A whole lot of water ice was exposed by this impact," Brown University planetary scientist Ingrid Daubar, part of the InSight science team, told a news briefing in October.

"This was surprising because this is the warmest spot on Mars, the closest to the equator we've ever seen water ice".

Lori Glaze, director of NASA's Planetary Science Division, said that while ice is known to exist near the Martian poles, future human exploration missions would aim to put astronauts as close to the equator as possible for warmer conditions.

Ice near the equator could provide resources such as drinking water and rocket propellant.