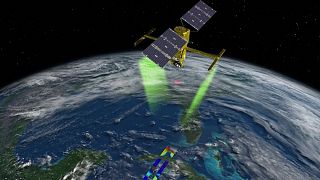 We may soon be able to track how the amount of water on our planet changes over time, thanks to a NASA satellite.

A SpaceX rocket launched on Friday carrying a satellite designed to conduct the first global survey of Earth's surface waters.

It is hoped that the Surface Water and Ocean Topography satellite (SWOT) could shed new light on rising sea levels and climate change.

Over three years, SWOT will take high-definition measurements of oceans, lakes, reservoirs, and rivers over 90 per cent of the world's surface.

The radar sweeps of the planet are expected to enable researchers to better trace fluctuations in the planet's rivers and lakes during seasonal changes and major weather events.

Freshwater bodies are another key focus for SWOT, which is equipped to observe the entire length of nearly all rivers wider than 100 m as well as more than a million lakes and reservoirs larger than 15 acres 62,500 sq m across.

According to NASA's Jet Propulsion Laboratory (JPL), SWOT can do so with 10 times greater resolution than existing technologies.

"SWOT'S going to make a big advance there, it's going to push us closer to the coast and allow us to see that interface, that land-ocean interface a little more closely and directly," JPL scientist Ben Hamlington, who also leads NASA's sea-level change team, said.

Previous studies of water bodies relied on data taken at specific points, such as from river or ocean gauges, or from satellites that could only track measurements along a one-dimensional line.

This enables scientists to accurately map their observations in two dimensions, regardless of weather or time of day, and to cover large geographic areas more quickly than before.

Ultimately, the new technology will allow scientists to explain "not just for the whole world, but also for individual regions and individual lakes and reservoirs and rivers," NASA's SWOT freshwater science lead, Tamlin Pavelsky, said.