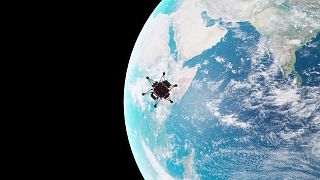 With NASA's successful Orion test flight orbiting the Moon and uncrewed Boeing Starliner test flight to the International Space Station, 2022 was a busy year in space.

And 2023 promises not to disappoint.

In early 2023, two lunar landers, built by Pittsburgh's Astrobotic Technology and Houston's Intuitive Machines, are expected to land on the Moon's surface.

The lunar landers will carry a range of rovers and experiments to the lunar surface, some helping pave the way for the return of astronauts.

In April, the European Space Agency (ESA) is expected to launch its Juice mission to observe Jupiter and its icy moons.

The spacecraft will make detailed observations of the gas giant and its three large ocean-bearing moons - Ganymede, Callisto and Europa.

In September, NASA's Osiris-Rex spacecraft is expected to return samples, scooped up in October 2020 from asteroid Bennu back to Earth.

Bennu’s carbon-rich material is believed to help scientists better understand how planets formed billions of years ago, and how life originated here on Earth.

As soon as the spacecraft returns with the samples, NASA is expected to launch its Psyche mission in October to a unique metal-rich asteroid orbiting the Sun between Mars and Jupiter.

With timing undecided, NASA also plans to strap in astronauts for Boeing Starliner’s next trip to the ISS sometime in 2023.

NASA has long wanted two competing US companies ferrying astronauts to the orbiting lab as added insurance, as it drastically reduces its reliance on Russia for rides to and from the space station.

Last but not least, Elon Musk's SpaceX plans to launch its Starship capsule on top of the biggest and most powerful rocket ever built. The liftoff thrust of the Super Heavy booster will measure about 120 m and 7.7 million kg.

NASA will conduct the first mission named Polaris Dawn with a Starship sometime this year.

The launch - which be the start of a three-day test flight orbiting around Earth - will be a "baby step" before the final mission to land astronauts on the Moon in 2025 or so, in the first lunar touchdown since Apollo.