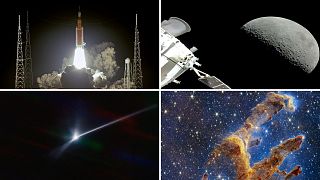 2022 has been a milestone year for space exploration.

From new space telescopes giving a view into the deep past of the universe to the belated test launch of a rocket that will fire humans to the Moon once again, this year saw a steady flow of major forward steps in humanity’s quest to investigate the cosmos.

There were also ramifications for space exploration from Russia’s invasion of Ukraine, which has seen a deterioration in relations between Western space agencies and Russia’s Roscosmos.

This has happened while Russian and NASA astronauts continue to work together kilometres up on the International Space Station.

Here’s a look at the biggest stories in space this year.

Artemis I blasts off

NASA’s mission to land humans on the Moon once again took a giant leap forward in November, when its much-delayed Artemis 1 finally taking to the skies.

Artemis 1 is the first of a number of Artemis missions to enable human exploration of the Moon and Mars.

The ambitious project was hit by a number of setbacks and delays, with billions in cost overruns.

But on November 16 NASA’s most powerful rocket ever - the giant Space Launch System - lifted off, carrying the Orion spacecraft that will host astronauts on the next leg of the mission.

Artemis 1 saw three flight test dummies on board, as the team pushes the limits of what the Orion spacecraft can do before human astronauts are sent up on a similar mission for Artemis 2.

Artemis 2 is scheduled for 2024, but in the meantime, there will be a wealth of data to analyse from the first Artemis mission.

Decades in development, the successor to NASA’s celebrated Hubble Space Telescope was finally launched into space on Christmas Day 2021.

This year, after it completed its 1.5 million kilometre journey from Earth and warmed up its scientific instruments, the James Webb Space Telescope started beaming back image data revealing the cosmos like it's never been seen before.

The $10 billion (€9.4 billion) telescope can produce the deepest and sharpest infrared images to date, working like a time machine to peer further and deeper into the universe than ever before.

It has already shown off its capabilities by showcasing famous galaxies and interstellar gas and dust clouds in new awe-inspiring detail.

But the telescope has also been put to work to examine the makeup of atmospheres on exoplanets, recently revealing the molecular and chemical profile of a world orbiting a star some 700 light-years away.

Knocking an asteroid off course

It sounded like the plot for a sci-fi movie - sending a spacecraft millions of miles into space to crash into an asteroid, nudging it off its trajectory towards Earth.

While the Didymos asteroid system wasn’t actually on course to collide with our planet, NASA’s DART mission was intended to test whether we had the capability to push an asteroid off its course, in case one day we spot one that is heading for us.

And it was a success. In late September, the DART spacecraft smashed into the asteroid at 22,500 km/h, some 11.3 million kilometres from Earth.

Subsequent observations and calculations confirmed the impact had successfully altered the orbit of Dimorphos, the moonlet orbiting its bigger partner asteroid Didymos.

The impact left a stunning 10,000 km debris trail across the sky and potentially bolstered our arsenal in the fight against future Earth-bound asteroids.

On the topic of planet-killing asteroids, one was spotted late this year. With a diameter of around 1.1 km to 2.3 km, the asteroid named 2022 AP7 is the largest object that is potentially hazardous to Earth to have been discovered in eight years, according to the team behind its discovery.

While described as a “planet killer” asteroid, it is not thought to be an immediate threat. It does cross the Earth’s orbit of the Sun, but at the moment it does so when the Earth is on the other side of the Sun to the asteroid.

The scientists who spotted it do say however that over time it will move closer and closer to us, so it will be something to keep an eye on for space watchers a few centuries from now.

Future of the International Space Station in doubt

The fallout from Russia’s invasion of Ukraine reached the International Space Station this year, with the new head of Russia’s space agency Yuri Borisov announcing Russia was going to quit the ISS after 2024.

The space station has been a joint international venture led by the US and Russia, with its operation depending on both of the senior partners.

Amid the deterioration of relations between the two sides, Borisov claimed the ISS was unfit for purpose and said Russia was going to build its own space station. He since rowed back on that threat.

Euronews Next spoke to Scott Kelly, a former NASA astronaut and captain of the ISS, who said of Russia’s threat to quit the project: “I don't believe they would ever leave, unless they had no choice, like unless they could not afford to launch another rocket to fly their crews up there, which might actually be a possibility actually at some point".

He pointed out that Russia gained international prestige from its part in the operation of the ISS, and that NASA’s ongoing cooperation with Russia was “just NASA being very, very practical”.

The European Space Agency (ESA) meanwhile officially ended its cooperation with Russia on the ExoMars mission to find life on the Red Planet.

The decision was announced in July, due to rising tensions between Russia and the West over the war in Ukraine.

ESA and Roscosmos had been collaborating on a mission to look for signs of life on Mars using the European ExoMars rover. Russia was to contribute with the launch of the spacecraft and landing platform, as well as instruments and radioisotope heating units on the rover.

Scott Kelly is also part of a NASA panel that has been convened to investigate UFO sightings.

The expert panel is going to analyse instances of 'unidentified aerial phenomena', which have been a hot topic since the release of videos by the US military showing US Navy Pilots encountering UAPs appearing to move strangely mid-flight.

NASA’s panel will look into unclassified sightings and other data collected from civilian government and commercial sectors.

Who could replace Elon Musk as the next Twitter CEO?