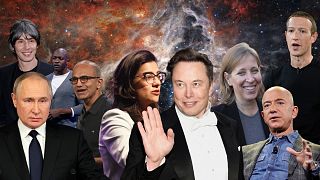 As far as recent years go, 2022 has been the one where things have started to feel relatively normal at last. That’s despite Russia’s invasion of Ukraine, Twitter being sold to a billionaire to cultivate as his personal playground, the United Kingdom setting a record for its shortest-serving prime minister in history and the dystopian horror of Palmer Luckey designing a VR headset that kills users in real life if they die in the game.

At Euronews Next, we’ve been covering all things science, tech, healthcare, business and innovation - but which headlines can you remember?

This review can help jog your memory before you take our special end-of-year quiz below.

The year kicked off with Apple becoming the first US company to be worth $3 trillion (€2.8 trillion) in value. In Baltimore, a 57-year-old man underwent the world’s first successful pig heart transplant. Countries across Europe were reporting record numbers of COVID-19 cases, the majority being the Omicron variant, and the New York Times bought out Wordle for a seven-figure sum.

Netflix reported it had lost 200,000 subscribers - its first major loss in a decade - and Twitter first announced its plans to sell to Elon Musk for $44 billion (€41.4 billion).

As we approached the summer months, Apple ended the production of its iPod device after 21 years and the Thai government gave a million cannabis plants to its citizens after making it legal to grow at home. Ukraine won Eurovision and Finland and Sweden announced plans to join NATO following Russia’s invasion of Ukraine.

Cases of the monkeypox virus started to rise in Europe, a global first for the illness. DNA research came to light that proved the Black Death, a plague which was especially prevalent in European cities in the 14th century, originated in Kyrgyzstan. And the US Supreme Court overturned Roe v Wade, striking down the constitutional right to abortion in America.

It was a dramatic time in British politics, with 40 ministers and aides withdrawing their support for Prime Minister Boris Johnson and resigning from his government. The first image captured by the James Webb Telescope was unveiled by NASA and US President Joe Biden. Elon Musk tried to pull out of his Twitter deal, and a heatwave in Europe resulted in the deaths of 1,500 people across Portugal and Spain.

In August, Volkswagen released its first prototype for a flying car. Cells of recently dead pigs were brought back to life by researchers at Yale University, raising ethical questions over the definition of death. The UK's inflation rate hit a 40-year high of 10.1 per cent, with food costs the largest contributor. Europe had the warmest summer ever recorded, 0.4 degrees warmer overall, with August 0.8 degrees warmer.

September began with the death of Queen Elizabeth II and the ascension of King Charles III. The UN’s International Labour Organisation reported that the number of people trapped in modern slavery had increased by 10 million in the last five years and totalled 50 million people worldwide.

After a months-long will-he-won't-he takeover saga, Elon Musk finally acquired Twitter and immediately fired its top executives. The Nobel Prize for Physiology or Medicine was awarded to Svante Pääbo for "discoveries concerning the genomes of extinct hominins and human evolution" and the Nobel Prize in Physics was won by Alain Aspect, John Clauser and Anton Zeilinger for their groundbreaking experiments using entangled quantum states. Liz Truss became the shortest-serving prime minister in the UK’s history, resigning after just 44 days in the position.

As we approached the end of the year, temperatures dropped and energy prices rose across Europe. Belgium introduced the four-day workweek, Musk fired half of Twitter’s workforce, and the Alzheimer's drug lecanemab was proven to slow the cognitive decline caused by the disease, in what many have hailed as a breakthrough.

At this point in the final month of 2022, the world has seen a dramatic rise in Strep A cases, especially among young children. Ukrainian President Volodymyr Zelenskyy was awarded Time Magazine’s Person of the Year, and the cryptocurrency exchange FTX was involved in a major fraud scandal engulfing its CEO and other senior executives.

What else happened in the world of science and tech? Take our quiz:

For more on the top headlines of 2022, check out our Year in Review specials.