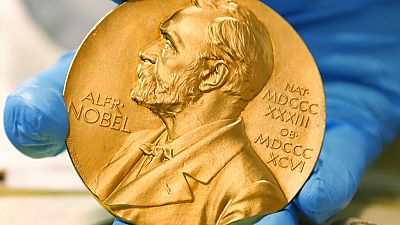 This year's Nobel Prizes in Physics and Chemistry were awarded by the Swedish Academy this year.   -   Copyright  Fernando Vergara/AP   -
By Giulia Carbonaro  & Reuters  •  Updated: 06/10/2022

Groundbreaking discoveries in the fields of click chemistry and quantum mechanics have been awarded this year’s prestigious Nobel Prizes in Chemistry and Physics, with three scientists per field jointly receiving recognition for their individual work.

But what does their research tell us about the world we live in, and how did they change it?

While most people have the utmost respect for Nobel Prize winners, it’s also true that a majority of us may not have the knowledge to immediately grasp why the scientific results, recognised by the Swedish Academy who judge the prizes, have the potential to change our lives.

Here we try to explain what their work will mean for the rest of us.

Nobel Prize in Physics: Nature is ‘spookier’ than we thought

John Clauser, Alain Aspect and Anton Zeilinger were jointly awarded this year’s Nobel Prize in Physics for their independent work on quantum weirdness.

The three all studied the “entanglement” of photons, the behaviour of two subatomic particles of light which act like a single unit even when not physically linked and separated by a large distance.

This phenomenon was dubbed "spooky action at a distance" by arguably the most influential physicist in history, Albert Einstein.

Though the idea of quantum entanglement, or weirdness, was theoretically developed in the 1960s by Northern Irish physicist John Stewart Bell, it had not been proven before Clauser, Aspect and Zeilinger’s experiments.

It turned out that the spookiness Einstein spoke of is definitely there - and it could be used to our benefit.

Quantum mechanics might sound rather abstract and far away from other daily lives, but it’s closer than we might think.

The trio’s entanglement research could be applied to quantum computers, promising a change in the way we use artificial intelligence to solve complex problems, such as world hunger and the climate crisis, as well as for encryption, making it harder for someone to hack private communications.

Nobel Prize in Chemistry: A way to link molecules like Lego blocks

This year’s Nobel Prize in Chemistry was awarded to the groundbreaking research of scientists Carolyn Bertozzi, Morten Meldal and Barry Sharpless, who discovered reactions that let molecules snap together like Lego pieces to create new compounds.

Explained in such terms, "click" chemistry - the field studying the way molecules can be linked together - sounds rather simple. It’s far from it.

Click chemistry is a field of study in which molecular building blocks snap together quickly and efficiently, forming new complicated molecules.

Sharpless, who has just received his second Nobel Prize in Chemistry, laid the foundation of this new form of chemistry and coined its name around the year 2000.

Where linking molecules together is an extremely complex operation, click reactions are very fast, clean and reliable and don’t produce unwanted side products. Instead of taking place in harmful solvents, the reactions are made inside water.

Shortly afterwards, Meldal and Sharpless both independently discovered the copper-catalysed azide-alkyne cycloaddition, a mouthful of words that indicate a chemical reaction now widely used in chemistry and which has created its own branch of synthetic chemistry.

Bertozzi then "took click chemistry to a new level," according to the Swedish Academy, developing click reactions that work inside living organisms - what she called "bioorthogonal reactions" - in 2004.

These click reactions, which don’t require copper, take place without disrupting the normal biochemistry of the cell.

Bertozzi’s bioorthogonal reactions have given us invaluable insight into the working of tumour cells, and how they develop and evade our immune system, as well as offering us ways to track these cancerous cells.

But there’s something inherent to click chemistry that is revolutionary in chemistry: this form of chemistry is environmentally friendly. Unlike other chemical creations, click chemistry avoids creating harmful waste and byproducts which would be expensive and hard to dispose of.