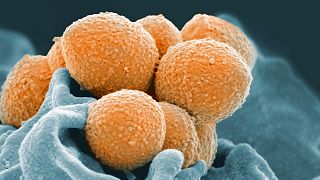 An electron microscope image of Group A Streptococcus (orange) during phagocytic interaction with a human neutrophil (blue).   -   Copyright  National Institute of Allergy and Infectious Diseases via AP
By Luke Hurst  •  Updated: 27/12/2022

Researchers have discovered an antibody in recovered Strep A patients that could protect against an infection of the potentially dangerous bacteria.

The team at Lund University in Sweden found that this antibody has a rare way of binding to its target protein, which they say could explain why so many attempts to develop a Strep A vaccine have failed so far.

The findings come amid a worrying outbreak of Strep A, with the World Health Organization (WHO) reporting an increase in deaths in some countries from the infections.

The health body warned that children under the age of 10 are the most affected group, with increases in cases reported in at least five European countries including the UK, Ireland, France, the Netherlands and Sweden.

Strep A - or Group A Streptococcal infection - usually causes mild illnesses such as tonsillitis, pharyngitis, impetigo, cellulitis and scarlet fever. However, in rare instances, it can cause life-threatening conditions.

The WHO says the rise in cases may reflect an early start to the Strep A infection season, along with an increase in respiratory viruses.

Healthcare professionals currently rely on antibiotics to fight Strep A bacteria, but there are worries that the emergence of drug-resistant strains or medicine shortages could pose a serious public health threat.

Researchers have therefore been trying to create target-seeking antibodies as an alternative way to fight the infection.

The team at Lund University found an unexpected way in which antibodies interact with Strep A, and how they hook onto what is probably the most important bacterial protein on the cell surface - called the M protein.

“We found that it happens in a way that has never been described before,” explained Pontus Nordenfelt, one of the authors behind the study.

“Normally, an antibody binds via one of its two Y arms to its target protein at a single site, regardless of which of the two arms is used for binding. But what we have seen - and this is vital information - is that the two Y arms can recognise and hook onto two different places on the same target protein.”

This means the two arms of the antibody can bind to two different sites on a target protein, which is the kind of binding that is needed for effective protection.

The researchers think because it is a rare form of binding, it may be the reason why the bacteria manage to escape the immune system.

Finding an antibody that attaches to the M protein - which flags it to the immune system - can stop the bacteria from infecting the body’s cells - but these antibodies have proven hard to locate.

The researchers therefore focused on examining antibodies in patients who had recovered from Strep A infection and identified three so-called monoclonal antibodies.

Monoclonal antibodies are identical copies of each other, and in this case target a single protein (the M protein) of Strep A.

This opens up possibilities where previous vaccine attempts have failed

The researchers then investigated in animal studies whether it is possible to use the antibodies to strengthen the immune system in its fight against the bacteria.

It turned out that the antibody with the newly discovered binding mechanism produced a strong immune response against the bacteria.

The researchers have now applied for a patent based on the findings in the article and will continue to study the antibody.

“This opens up possibilities where previous vaccine attempts have failed and means that the monoclonal antibody we used has the potential to protect against infection”, concluded Wael Bahnan, one of the authors behind the study.

The results were published in the journal EMBO Molecular medicine.

Our top health stories this year that weren’t about COVID