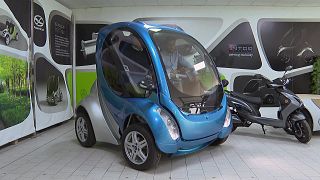 A Spanish company is betting on its design for an electric foldable car to revolutionalise the way we travel around cities.

The vehicle, which is currently in the development stage, is called the Lakota and can fold itself into a such compact size that three of the vehicles could fit into a normal single parking space.

When folding, the Lakota pulls its electric motors, steering, and brakes into the wheels. This technology makes it possible to reduce the dimensions of the car from 3 m to 2 m. The driver can then exit the car from the front.

The concept of a foldable car was originally conceived by the Massachusetts Institute of Technology (MIT) in 2010 when the institution named its prototype the "CityCar".

In the same smart city project, the MIT team also devised technology named "roboredas" which allows a car to rotate on its own axis like a spinning top or turn like a spinning top. The research team called it an “O-turn,” saying it would allow the car to park sideways or change lanes straight ahead.

We are designing the vehicles for the new smart cities, but it can be used now.

Spanish automaker NTD Energy - an offshoot of Seat Volkswagen - has planned three versions of such foldable cars - a convertible "buggy," a two-seater, and a mini-delivery truck.

"We are designing the vehicles for the new smart cities, but it can be used now," Ricardo Arrondo, CEO of NTD Energy, said.

The company envisions the two-seater car to be a city-owned vehicle that can be hired.

It will have designated parking spaces in hotels and museums, and drivers could pay less if they agree to broadcast advertising on the screen that pops up on the back of the car when it folds.

According to the manufacturer, fast charging of the car takes only about 15 minutes from 20 per cent to 100 per cent while slow charging would typically take about three to six hours.

While it is still looking for the backing of a major investor, NTD Energy says it plans to manufacture 1,200 urban electric vehicles throughout 2023.