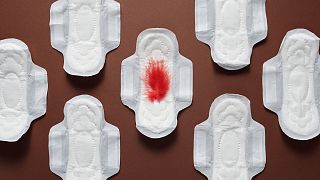 Spanish lawmakers adopted on Thursday a new bill creating a menstrual leave for women suffering from painful periods and strengthening access to abortion in public hospitals.

This text was adopted by deputies in the lower house of the Spanish parliament on its first reading, with 190 votes in favour, 154 against, and 5 abstentions. It will now go to the Senate.

"This legislature is a legislature of feminist conquests," Irene Montero, Spain's Minister of Equality and a member of the radical left-wing Podemos, a party allied with socialist prime minister Pedro Sanchez's government, told the Congress of Deputies.

"We recognise menstrual health as part of the right to health and we fight stigma and silence," she added.

The length of sick leave that doctors will be able to grant to women suffering from painful periods has not been specified in the bill.

When this bill is finally adopted, Spain will become the first country in Europe and one of the few in the world to integrate this measure into its legislation, following the example of Japan, Indonesia or Zambia.

However, there are reservations in certain quarters, particularly within the UGT trade union, one of the country's two major unions, over concerns about the possibility that employers who want to avoid these absences will put a brake on the hiring of women.

"Menstrual leave" is one of the key measures in the broader legislation, which also provides for increased access to abortion in public hospitals. Less than 15 per cent of abortions performed in the country take place in these institutions, mainly because of conscientious objections by doctors.

It is also to allow minors to have abortions without parental permission at 16 and 17 years of age, reversing a requirement introduced by a previous conservative government in 2015.

Abortion was decriminalized in Spain in 1985 and then legalized in 2010, but abortion remains a right fraught with difficulties in this country with a strong Catholic tradition.

This bill also provides for the reinforcement of sex education in schools as well as the free distribution of contraceptives and menstrual hygiene products in high schools.

Spain is a country considered a reference for women's rights in Europe, especially since the adoption of a law on gender violence in 2004. The Sanchez government has more women than men in its ranks.