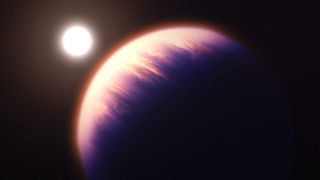 NASA’s most powerful space telescope has identified the molecular and chemical profile of an exoplanet’s atmosphere, in another demonstration of its ability to unveil the mysteries of the cosmos.

The James Webb Telescope has been astounding space watchers since its launch earlier this year, with its powerful infrared capabilities giving scientists a window into deep space that was previously out of view.

One of the capabilities afforded by its infrared sensors is to uncover the “chemical fingerprints” of distant worlds.

And for the first time, NASA announced it had uncovered a full reading of the atoms, molecules, signs of active chemistry and even clouds on a Saturn-sized planet orbiting a star 700 lightyears away.

The scientists behind the discovery say these findings bode well for future investigations into the atmospheres of planets orbiting other stars, including rocky planets that could be candidates for hosting life.

James Webb and other space telescopes have previously revealed isolated ingredients of this broiling planet’s atmosphere.

But its newest readings go into much deeper detail, giving an idea of even how the clouds around the planet may look. It is believed they could be broken up, instead of a single, uniform blanket over the planet.

The planet, known as WASP-39 b, has been dubbed as "hot Saturn," being a similar size to our solar system neighbour but in an orbit closer to its star, tighter than that of Mercury to our Sun.

Webb tracked WASP-39 b as it passed in front of its star, allowing some of the star’s light to filter through the planet’s atmosphere.

Planets are sculpted and transformed by orbiting within the radiation bath of the host star. On Earth, those transformations allow life to thrive.

Different types of chemicals in the atmosphere absorb different colours of the starlight spectrum, so the colours that are missing tell astronomers which molecules are present.

"We observed the exoplanet with multiple instruments that, together, provide a broad swath of the infrared spectrum and a panoply of chemical fingerprints inaccessible until [this mission]," said Natalie Batalha, an astronomer at the University of California, Santa Cruz, who contributed to and helped coordinate the new research.

The findings include the first detection of sulphur dioxide (SO2) in an exoplanet atmosphere, a molecule produced from chemical reactions triggered by high-energy light from the planet’s parent star.

On Earth, our ozone layer in the upper atmosphere is created in a similar way.

"This is the first time we see concrete evidence of photochemistry – chemical reactions initiated by energetic stellar light – on exoplanets," said Shang-Min Tsai, a researcher at the University of Oxford.

"I see this as a really promising outlook for advancing our understanding of exoplanet atmospheres".

This led to scientists improving modeling of photochemistry data, which they say will help to build the technological know-how to interpret potential signs of habitability on exoplanets in the future.

"Planets are sculpted and transformed by orbiting within the radiation bath of the host star," Batalha said. "On Earth, those transformations allow life to thrive".

The discoveries are detailed in a set of five new scientific papers, three of which are published and two of which are under peer review.

NASA's Orion arrives back to earth after landing in Pacific Ocean