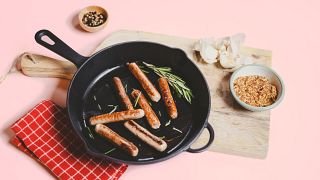 One of the big questions facing humanity right now is how to feed a global population with an increasing demand for meat, while not destroying the planet in the process.

The future of food was high on the agenda at Web Summit in Lisbon this month, and executives from two cultivated meat companies explained in detail to Euronews Next why lab-grown meat may hold the answer.

What their companies - and dozens of others - have demonstrated is that it is possible to take a tiny sample of cells from an animal, and from that sample grow meat in a lab without the need to raise, rear or kill the animal.

The process was first demonstrated to a worldwide audience nearly a decade ago, when the first lab-grown burger was eaten at a press conference in London.

And just this week, the US Food and Drug Administration (FDA) authorised the sale of lab-grown chicken for human consumption, following in the footsteps of Singapore, the first country to do so in 2020.

‘You can’t innovate on a cow’

If humanity is to achieve the climate goals being discussed this month at COP27, innovation and change will be needed in the animal agriculture industry.

But as Daan Luining, co-founder and CTO of lab-grown meat company Meatable told Web Summit: “You can’t innovate on a cow”.

Instead, he is calling for more support for the growth in innovation in slaughter-free meat.

Luining, who has worked in this field for nine years with a background in cell molecular biology and tissue engineering, helped make the first lab-grown burger in 2013.

His company is developing a pork mince product, with beef mince also in the works - and they are hoping to launch their first product in Singapore next year.

Is cultivated meat the future of meat?

Advocates for lab-grown meat point to three key problems around animal agriculture, as it stands, that need fixing.

Firstly, the environmental impact is massive, accounting for around 14.5 per cent of all carbon emissions, according to the UN’s Food and Agriculture Organization (FAO). There is also a strain on the resources required to produce beef.

For example, an estimated 25 kg of dry feed is needed to make a kilogram of meat from a cow, and that same kilogram requires around 15,000 litres of water, according to the Water Footprint Network.

Some studies have suggested replacing traditionally reared animal meat with lab-grown meat could cause as much as 96 per cent lower greenhouse gas emissions.

Then there’s the ethical consideration. Some 80 billion animals are killed every year for human consumption, with many of those animals held in poor conditions.

Many are not slaughtered in a “humane” manner - defined by the Humane Slaughter Association in the UK, for example, as when “an animal is protected from avoidable excitement, pain or suffering”.

And third, there is the matter of food security. Many countries don’t have the space or natural resources to rear animals to meet their population’s meat demand and rely instead on imports.

Europe ‘standing on the sidelines’

So why has cultured meat not taken off in Europe yet?

Luining told Euronews Next he found it “outrageous” that the continent is “just standing on the sidelines”.

Asked why his company was first launching its products in Singapore, he said: “The EU is lowest on the list of priorities, because it takes so long”. “As a start-up, we can't afford that,” he added.

The European Food Safety Authority (EFSA) regulates the industry, and there are strict criteria for a new product to be approved for sale in the bloc. Luining explained the process requires a lot of back-and-forth and he felt frustrated by a lack of clarity from the regulator.

“They're not very keen on starting the conversation and helping us understand what they actually want from us,” he said.

By contrast, he said authorities in Singapore “have set up an entire government organ to help [us] and have been fantastic. Definitely the European Union could take note”.

The company will be gauging what the customers in Singapore think of its lab-grown meat and eventually will be able to use that experience when it comes to expanding to other markets, such as Europe.

That meat for the time being is pork mince, which can be made into a variety of products such as sausages or dumplings.

The tech - and costs - behind lab-grown meat

Because of the current state of the technology, mince meat is what most companies in this space are making right now.

“Our technology can identify the cells that we can grow outside of the animal, basically in large fermentation tanks,” its CEO Richard Dillon told Euronews Next.

We create pure muscle, pure fat, and we can put it together to make the healthiest mincemeat

“And in the process of growing them, they replicate themselves. We then create pure muscle, pure fat, and we can put it together to make the healthiest mincemeat”.

The company came from Oxford University, where two of the original co-founders were based.

“They were looking into where there is the most research on animal mammalian culture,” Dillon said.

“And actually, it's humans. But the mammal that people eat which is closest in terms of biology to humans, is pigs. And so it was very practical,” he explained.

“Then from a commercial perspective, chicken and pork is the most eaten meat on Earth. So just the market size and the impacts that it could have globally is huge”.

But while the potential market may be there, one of the main barriers to cultivated meat hitting the supermarket shelves - aside from regulation - is cost.

“No one's ever grown mammalian cells at the large scale that would be needed to bring the costs down to feed people,” said Dillon.

The industry needs to prove it can scale, sourcing the large tanks and the materials needed to grow the cells inside them, he explained.

“That needs to essentially go through a reinvention of that supply chain to get those inputs at scale at a food-grade cost instead of a biopharmaceutical cost.”

He said there have been great strides made since the first lab-grown burger was demonstrated. That burger cost around €250,000 to produce.

“We could do the equivalent now for less than $100 (€100). And we're still at a very small pilot scale. So it's going to be orders of magnitude with the costs coming down over the next two years”.